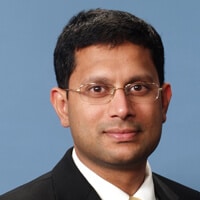 As a child growing up in New Delhi, the capital of India, Thomas Verghese understood that life was about extremes.  These extremes lay not only in the minutely focused school day, which essentially lasted from five in the morning until ten at night through hundred-degree heat, but also in the filtering process that students underwent from an early age.

The first choice children were expected to make was that between sports and academics.  “In America, you’re encouraged to be well rounded, but in India, you have to be like an arrow, constantly aimed and shooting toward what you want—that singular goal,” he recalls.  “It was my passion early on to be the best, so that’s what I was constantly striving for.”  Now a managing partner of SAXON Infotech, Inc., a growing software and research company based out of Columbia, Maryland, Thomas still aims for perfection, but the way he defines this term has acquired new depth and nuance over the years.

Confronted with that initial decision, Thomas chose to commit his faculties toward academics, and by the time he reached tenth grade, he had situated himself well on the track to pursuing a future in the sciences.  By the time he reached twelfth grade, the separation process had been complete.  Those aiming for a highly competitive slot at one of the best schools, like Thomas, had been siphoned off into one class, separated from others who hadn’t made the cut.  “Those last two years of grade school in India are among the most competitive you can imagine,” he reminisces.  “If you want to embark on an upward trajectory, you have to really perform during that timeframe.”

Steadfastly committed and fueled by his passion for excellence, Thomas earned himself admittance to the Indian School of Technology, Delhi to study engineering, having been one in about 200 thousand applicants competing for a spot at the esteemed institution.  Upon graduating, he spent three years working for a $2 billion company.  The experience was somewhat unusual for an engineering graduate in that it focused more on sales and business development, but nothing could have been more fortuitous for young Thomas.  “It was exciting in the sense that you could see the flow of revenue, and that fascination stayed with me,” he reports now.

Driven by that spark and his lifelong interest in continued learning, he again competed against the best of the best and won a spot at the Indian School of Management, Ahmedabad, currently ranked eleventh in the world in its field.  “Getting an MBA is extremely useful for running a business, especially a small or mid-sized company, because you can see the enterprise end to end,” he explains.  “You come to see that working capital is your lifeline and to understand how revenue flows.”

Having honed his skills with such intention, Thomas wondered when he would start his own business.  Entrepreneurship ran deep in his family history, with successful traders and merchants peppering his lineage.  Through his corporate experience with General Electric and MMTC thus far, he had come to understand that giving people freedom in the workplace maximizes their productive potential, as he himself preferred to do independent work in which he reported primarily to himself, and he looked forward to incorporating this approach into his own leadership style someday.  “I’ve always had a passion to start something and to do something of my own,” he reveals.

Swallowing his entrepreneurial dreams for the time being, though, Thomas came to the U.S. to earn his advanced degree in information systems from Carnegie Mellon.  “In a broad sense, I understood that the world was in the process of being shaped by information systems,” he explains, “but I’m the kind of guy who really likes to dig into the details at a fundamental level.  This is where I feel most comfortable; it’s a source of power for me.”

Having earned a degree that would impart this comprehension of detail, Thomas accepted a position as Director of Research at CredAbility, a financial and debt management services firm in Atlanta, Georgia.  In this capacity, his skills were challenged as he explored business intelligence, information structuring, and data trends, reviewing client profiles for patterns so that he could best understand the issues they were facing and thus recommend meaningful service improvements to the company.

It wasn’t until three years later, when Thomas crossed paths with an old acquaintance, that his entrepreneurial spirit again began to stir.  Shibu Jose had also come over to the states from New Delhi, and in 2005, he launched SAXON in accordance with his dream of starting a software company.  Thomas, however, was more impassioned by the prospect of building something all their own.  “Yes, I have a degree in engineering, but I’m much more interested in setting up a business and its structure,” he reports, voice full of enthusiasm.  “While Shibu is more well know for the technological aspects, I was most excited about building the company from scratch.”

Pragmatic and somewhat risk-averse in his approach, Thomas kept his job with CedAbility while helping to mold SAXON on the side, only taking the full leap to SAXON in 2009 when its profits had stabilized.  “I like to jump into what I’m doing, but once I do, I fall into it completely,” Thomas explains.  “I like to fully weigh the pros and cons, ensuring that I make a soundly rational decision before entering into anything.”

When he first came fully on board, the enterprise lacked skeleton and structure, functioning as best it could without any systems in place.  Leveraging the strategic thinking skills that set him apart, Thomas swiftly commenced securing a professional accounting group for SAXON, as well as an effective marketing strategy.  “It’s my job to do all the foundational steps in terms of making sure the appropriate systems are in place as the company matures,” he explains.  “With these systems, I’m ensuring that the company is growing revenue-wise, as well as diversifying and maintaining the interests of our client base.”

SAXON originally started as an IT placement company securing highly qualified consultants for Fortune 500 companies, as the market for such services in 2005 was lacking.  “If you were looking for someone with a very specific skill, it was hard to find those individuals, so we sought to fill that void,” Thomas explains.  Then, as the market shifted, they looked inwardly as well as outwardly to determine how they could differentiate themselves amidst shifting terrain and demands.  Shibu’s information architecture skills had gained considerable renown, so the firm picked up project management services to supplement its placement expertise.

With eyes still to the horizon, SAXON then underwent additional evolution by recognizing the wealth of untapped knowledge possessed by its staff.  Shibu and Thomas thus decided to further differentiate themselves by adding research to their repertoire, exploring the horizons of software application creation and boundaries.  “In this capacity, we’re contributing to a product which might become a success down the road, so it’s a long-term investment,” says Thomas.  It is without a doubt that the competitive spirit so deeply ingrained in Thomas throughout his childhood has come to the aid of SAXON today in this fashion, maintaining its poise on the cutting edge of the industry.  “This is real life, and it’s competitive,” he continues.  “In a free market economy, it’s hard to compete on rate because other companies can always outsource.  As such, we prefer to compete on quality.”

Competing on quality in this manner, SAXON has chiseled out quite a name for itself, boasting 25 employees and revenues of just under $10 million.  In addition to Fortune 500 companies and other commercial clients, they now serve the Federal government as well.  Thomas also envisions an aggressive growth plan over the next several years, aiming to increase the workforce to 100 and the revenues accordingly.  “That is our goal, but above all, this needs to be a place where people enjoy doing the work and have an appropriate work-life balance,” he emphasizes.

This slight relaxing of his otherwise stick-straight standards does not so much represent a departure from perfection, but rather a revamping of its meaning.  With one daughter already and his wife Litty and him expecting another, Thomas’s management philosophy has come to embrace a more balanced ideal—one that acknowledges the human side of a workforce and the fact that employees, too, have families.  Keenly tuned into the current recession and its implications for financial security, he recognizes that even after a lifetime of ultra-competitiveness, one really has power only over one’s own efforts.  “You can’t really control what happens to the fruits of your labor,” he points out.  “All you can really control is whether or not you do your best.”

“As long as we are financially stable and delivering the highest quality product to our clients, relaxing a little and broadening our horizons is a good thing,” Thomas continues.  “A company’s people are its biggest assets, and time is their greatest resource.  People should use it to pursue things that interest them.”  Thomas, himself, is tremendously well read in the arts, philosophy, and literature, and continues to delve deeper into such topics, using his own free time to launch an internet portal of collaboration and discussion entitled MyCulturalIndia.com.  “Life doesn’t always need to be about violence and power play,” he affirms.

In advising young entrepreneurs entering the business world today, Thomas lists first and foremost the importance of setting goals.  “This is a very difficult process, and you need to evaluate it carefully,” he cautions.  “Start thinking early about what you’re passionate about and what differentiates you from others.”  Beyond this, he emphasizes the fact that we are all essentially competing globally now.  “Don’t get too focused on your immediate environment, because there’s a whole world out there,” he advises.  “Be competitive, yet be balanced, and in achieving the goals you have in life, don’t sacrifice the art of living.”