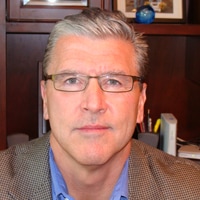 The Business of Team Spirit

Growing up in a blue collar town in Western Pennsylvania, Greg Jones may have been the short fat kid, but that all changed in eighth grade when he hit a major growth spurt and suddenly found himself over six feet tall and chock-full of athletic talent.  He played wide receiver for the varsity football team during his sophomore year, moving up the ranks as a running back and linebacker by the time he was a junior.  He sought out by college recruiters across the country but decided to play for Penn State, mastering the concept of team and embodying the power of hard work while staying close to home.

“Then, after college and after playing for the Eagles for one season, the real world set in,” Greg recalls.  “Do you keep striving for the NFL dream, or do you go with it?  It’s a humbling world out here, especially coming from where I came from.”  He remembers the first several years out of school as being tremendously formidable, but he soon learned that those same tenets of team and hard work could be leveraged in the business world just as he had leveraged them on the football field.

“I learned that people in the business world had successes and failures just the same, and I realized I could play in that world too,” Greg continues.  After spending time in corporate America and learning how to climb that ladder, he soon realized there was no reason he couldn’t pursue another dream: the goal of running his own business.  Now the CEO of BookKeeping Express, the nation’s only franchise model for outsourced bookkeeping and financial intelligence consulting, Greg’s entrepreneurial spirit takes the idea of team to a whole new level.

BookKeeping Express was originally founded in 1984 in Southern California by Roy Graboff, who had wanted to start up a small practice to get out of corporate America.  Graboff grew the firm through a license model that would grant licensees the right to use the firm’s software program and name.  Through training licensees in this manner, Roy and his team grew the company to 150 locations throughout the U.S., establishing a strong brand and national presence by the mid nineties.

In 2007, Greg and his business partner were looking for an investment and stumbled across a BookKeeping Express licensee in Virginia.  Greg reports that the light bulb went on immediately, and as they investigated the organization, they admired the fact that it serviced the largest business segment in the U.S. with mandatory product offerings whose necessity and value wouldn’t ebb and flow with the protean tides of the economy.  “My interest was piqued,” Greg remembers.  “We did our due diligence, bought the company, and moved the headquarters to Northern Virginia in 2007.  By January of 2008, BookKeeping Express Enterprises was opened for business.”

Launching the business for franchising was a long and grueling dance with the Federal Trade Commission that didn’t end until August of 2008, but it was well worth the effort, and Greg has been franchising the business ever since.  “The organization had very little involvement with its network of locations back when we were simply licensing,” Greg explains, “whereas franchising is the complete opposite.”  While the number of BookKeeping Express licenses slowly gave way to attrition, slipping from its peak of 150 down to roughly 22 today, BookKeeping Express currently boasts 26 franchisees in 22 different states, with two locations in Canada and one master developer invested in North Carolina.  Greg predicts this number will double in 2011 and again in 2012, with a goal of reaching 100 franchisees throughout North America by the beginning of 2013.

“When you strip it all down, our mission is essentially to meet with entrepreneurs that wish to build a company and match them with our system,” Greg explains.  “We help people to meet their goals and dreams of expanding their wealth and their life options.  This mission—this premise of ‘why’—is a central concept in our organization.  We’ve built a turnkey business model with everything from ongoing business training to a full IT structure so that our franchisees can focus on their immediate roles.”

In this sense, BookKeeping Express forms a team relationship with each of its franchisees, and nobody knows team spirit better than Greg.  “Franchising is a team sport,” he says with a laugh.  “Because you get the model, the program, the marketing material, and everything else in place, it’s like you’re starting your business at the forty yard line.  All the franchisee has to do is apply the sense, the skill set, and the business savvy.  They only have to take the model and run with it.”  In that sense, franchisees save hundreds of thousands of dollars in startup costs, and are thus able to build more successful and stable operations from the get-go.

From the beginning, Greg and his team have focused on minimizing costs for their franchisees while maximizing efficiency through the utilization of cutting edge technology.  By doing more with less and reaping the benefits of a paperless environment, BookKeeping Express is able to bring the skills and the resources that allow their entrepreneurs to maximize the virtual realm.  The firm also utilizes a third party marketing firm based in Chicago, among the best in the franchise business, to brand the company throughout North America.

At the same time, this marketing firm represents and promotes BookKeeping Express’s individual franchisees within their respective territories, connecting them with the newspaper, radio, magazine, and television presences they need to create buzz-worthy exposure.  To supplement these efforts, one BookKeeping Express staff member is assigned to each new franchisee for the franchise’s first 18 weeks of operation, providing coaching and mentoring to ensure that the program is being rolled out effectively.

Considering the strong current of entrepreneurialism that seems to permeate Greg’s bloodstream, it comes as quite a surprise that he didn’t have a lot of successful entrepreneurial mentors in his past.  “Early on, I always wanted to be the leader, the owner, the captain,” he remarks.  “Having achieved what I did in athletics, I know you don’t get there just by hoping and wishing.  It takes a lot of hard work and energy, and these lessons definitely helped to prepare me for the journey ahead.  If you let a few punches shake your focus from what the company is all about, you aren’t going to be successful.”

After earning his business degree, Greg worked as part of a management training program with Lowes Corporation before entering the Telecom world, which was just heating up at the time.  He sold hardware for the Harris Corporation in the D.C. metro area to the federal government, advancing up the corporate ladder from salesperson to sales manager to sales director through the early 1990s.  He then joined a little Chicago-based telecom service company called LCI, revitalizing it until it was deemed among the best telecom service companies in the country.

Though he held an esteemed management position, Greg and his wife wanted to move their young family out of Chicago, so he accepted a position as VP of sales for an international telecom company based out of D.C. called Primus Telecommunications.  “Through these efforts, I had the opportunity to see what happens at the top versus what happens below the top as a company goes public,” Greg remarks now.  “It spurred my interest and got me wanting to start a company of my own.”

Thus, in 1997, he and two partners launched an organization called Net Results.  Targeting Fortune 1000 Companies, Net Results served to reduce their clients’ telecommunications costs and was compensated by splitting the difference.  Greg and his partners grew the firm until they sold it in 2002, at which point his adventurous nature had taken an interest in franchising and real estate.  He and his partners bought the franchise rights for several Five Guys restaurants, launching the popular chain’s first Florida location.  Subsequent to that endeavor, Greg found himself helping a firm in Alexandria, Virginia, that specialized in developing franchise concepts.  Noting the prevalence of company owners with an abundance of passion and interest but lacking in the expansive skill set necessary to start a business from scratch, Greg realized he was faced with an opportunity to really make a difference.  “At that point, I knew it was time to make a leap,” he remembers.  “We decided to take it to a national scale, and the rest is history.”

In advising young entrepreneurs entering the workforce today, Greg advocates for a broad-spectrum mentality that encourages advanced planning and foresight.  “Kids these days have such a short window, but I would suggest that they try to look out a little further and really ask themselves what they want to be and what excites them,” he says.  “There’s the old adage that says you should do what you’re passionate about.  It’s hard to figure that out as a kid, but try.”

In examining where one’s passion might lie, Greg suggests looking two or three steps past the entry-level position in that field, quizzing people who hold such positions about their daily lives to acquire a better understanding of what it’s really like.  “Unfortunately, kids come out today needing to get a job and often have to accept positions that are far off base from what they want to do,” he acknowledges.  “Don’t give up on your dream, but instead try to develop a timeline for how to get back to what you really want to do.  It’s all about having a game plan.”

Regardless of whether you’ve arrived at where you want to be or you’re still working your way toward that goal, Greg emphasizes the importance of cultivating and obeying that inner drive that keeps one focused.  “When I need motivation, I look in the mirror,” he says.  “I hate the idea of not succeeding, and because of that, there’s no one that drives me more than I, myself, do.”

Indeed, pursuing one’s goals is not so much a competition between one’s self and others, but rather a competition between one’s own success or failure.  By aiming high and working as a team with the people in one’s life, success is made possible not only for yourself, but for others as well.  “With BookKeeping Express, I love that my goal is achieved in helping our franchisees achieve their goals,” he says.  “This means that everyone’s heart and passion has to be in it a hundred and twenty percent.”  Through this philosophy, Greg and his affiliates have the opportunity to partake in a success that, collectively, is much bigger than the dream of any single individual, and much more rewarding as well.