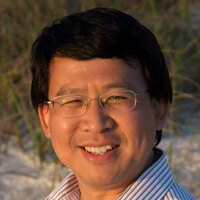 Luke Chung, Founder and President of Financial Modeling Specialists, Inc. (FMS) is a study in the success of taking risks. By starting FMS at the age of twenty-two and within the company’s first few months bringing it to a positive cash flow level, Chung has shown how great risk can bring great reward.

Founded in 1986, FMS was originally in the business of creating financial analytical models to help organizations manage their money and control costs. Over time the company evolved into a purely software development business, branching out to not only include financial analytics but to encompass all of the data needs of their clients.

“We would help people organize their data and our focus over the years has been to help people make better decisions,” Chung explains, “We organized the company into three areas of focus: products for the general public which include tools for Microsoft-related technology; custom database applications for government and corporate solutions; and counter-terrorism and law enforcement products and services including, Sentinel Visualizer, which is a software program that helps identify hidden relationships between people, places and things that we developed in response to the challenges of the 9/11 attacks.”

The idea of entrepreneurship and being in control of his own destiny has appealed to Chung his entire life. Growing up with a father who was a Land-Survey Engineer and a mother who was an Architect, Chung had self-employment modeled from birth.

“I have always admired people who could create their own businesses and lead the free enterprise system in this country. When you look at our beginnings and the people who built it, Ben Franklin and George Washington, they were inventors, farmers, and small business owners, I mean those are entrepreneurs. They didn’t have a job, they created a job and they ran things. It really wasn’t until the late 1800’s that a large percentage of the population became employees. And so I guess I always thought that I would rather be the creator than the follower.

Even though we have a free enterprise system, probably less than five percent of the people are self-employed or are really creating their own job. Most people have jobs created by other people for them. That’s not to say everyone is suited to entrepreneurship, and even those who are may not be successful. I was fortunate to have the opportunity to try it. I gave myself a year and thought I’d go to business school if I failed. It’s been personally gratifying to pursue my ideas and have the market justify it financially.”

Chung also became fascinated with money and how wealth grows in his early years in school. He recalls, “I remember this very distinctly, being in the seventh grade and having my math teacher compare compound interest versus simple interest. It was then that I understood why Einstein said compound interest was the greatest force in the universe.”

“I remember that it wasn’t such smooth sailing with my father when I was growing up. He and I would butt heads quite a bit. Early in my high school years, we made a deal that if I could make and keep straight A’s, then there would be no rules imposed on me. If I could fulfill my “job”, then there would be no curfews or discussions about my homework, but if I failed, he could dictate the rules. That was kind of entrepreneurial, and an example of how I took responsibility for myself.”

Chung attended Harvard University and majored in Engineering and Physical Oceanography. Having grown up in Florida, Chung loved the ocean and had a passion for it. The major seemed like a good combination of science and real-world application of hunting or hiding submarines. But, while on a six-week research cruise off of the California coast with the Naval Postgraduate School, Chung discovered how powerful the ocean was.

“During a three day period in 20 foot seas, I vomited up and down the western seaboard and decided that I needed a career change. I wasn’t spending my life doing that, no matter how fascinating it was.”

This was the summer before Chung’s senior year, and needing to find a career path that interested him and that he could enter with his degree was a bit challenging.

“The recruiters were on campus for positions in investment banking and management consulting, and I saw how they were using technology to manage data to make better decisions in organizations. I presented my strong analytic ability and business knowledge, and showed how that would translate to management consulting and financial analysis.”

Chung was hired by Strategic Planning Associates in Washington DC, and worked for the company for two years before focusing entirely his own company in 1987.

“I understood that there were several avenues for the generation of revenue for a business. You can sell your time and for every hour that you work you get some compensation (whether that is minimum wage or the top rate earned by the best lawyer in town), but at some point you are limited by the number of hours you can work and the amount that you can charge per hour; you can make money with money as in compound interest or investments; you can create something or invent something that could be sold over and over again to generate some sort of intellectual property stream (independent of the hours that your putting in); and lastly you can sell other people’s time. The main point is to not have one’s time be the factor or limitation of one’s revenue when creating a company.”

After twenty-five years, FMS has reached new heights in the technology industry and in its own history. FMS products have over 50,000 customers in 100 countries, their Sentinel Visualizer program led to an investment by InQTel, the CIA’s venture capital fund, and they have created a wide range of custom solutions that impact lives and the way people operate. Examples include a solution for the six United Nations (UN) agencies and the Pan-American Health Organization to coordinate logistics for natural disaster relief efforts in over 80 countries. They’ve also created a solution to manage the operations of the Washington Speakers Bureau, the world’s premier lecture agency, and many other solutions for non-profits, small businesses, government agencies, and large organizations.

FMS has weathered the storm of a tumultuous industry. “We’ve been through multiple business and technology cycles over the last 25 years. People forget that we started in a DOS world, which turned into Windows, then web, and recently added mobility and cloud.

There are many organizations that we’ve partnered or worked for that no longer exist. Think about this recession that recently came through and people were complaining that the economy shrunk a few percent, maybe. We are involved in an industry where eco-systems, just disappear. The DOS market disappeared and went to Windows. The dot.com boom and bust just took out a lot of companies. So having the economy shrink just a couple of percent is not significant in comparison.

We have experienced great years in a terrible economy and terrible years in a great economy. Our industry isn’t tied to the GNP. We are a little company that can live or die based on having one good contract or losing one big contract.”

Chung, a father of two young girls, not only cares about the success of his business and the employees found within it, but he also has a vision for the future of the world and how he can utilize the technology available, and develop new technologies, to help make the world a better place.

“I love creating things that have never been done before, so there is an inventor part of me that needs to be fulfilled.”

Chung also works with several organizations to utilize his unique combination of skills and experience to mentor and educate the next generation.

“I work with the Network for Teaching Entrepreneurship and went into the classroom at Annandale High School last year. I also serve on a Business and Community Advisory Board to the Superintendent of Schools and serve on the IT Policy Advisory Committee to Fairfax County Board of Supervisors representing the School Board.”

Chung’s advice to recent college graduates is to pursue their passions.“There are so many opportunities in the world but the world doesn’t come to you to tell you what you should do. It’s your responsibility to figure out what you want to do, then pursue opportunities in that space. If it’s something you’re passionate about, then it’s not a job. Being young offers to opportunity to take risks that are minimal over a lifetime but offer the opportunity to change the course of your whole life.”

Certainly a visionary, and taker of risks, Luke Chung has proven, at a young age, that you make your own destiny and that great rewards await those willing to take the chance.