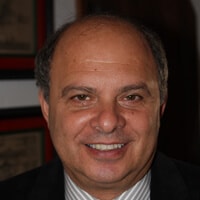 When Christos Papalouizou first started work as an evening busboy at a small Greek restaurant known as Taverna Cretekou, he was newly married and had just immigrated to America with his wife.  Enrolled in full-time day courses to study heating, ventilation and air conditioning, he couldn’t have guessed at the time that his part-time job would snowball into an engrossing, lucrative, and fulfilling career, but as he looks back now, he identifies this unpredictability as the beauty of it all.  “I never thought I was going to be the owner of such a successful Greek restaurant,” Christos muses today.  “That’s why you have to go with the flow, as they say.  You never know what surprises life will bring you.”

Having received a degree in accounting after studying for three years in London, it is evident that the restaurant business was never part of the young man’s plan.  In fact, Christos sought employment at Taverna Cretekou because it promised fast money while he studied HVAC, and with a baby on the way, he couldn’t afford to wait around.  Though his venture was initiated for financial purposes, however, Christos knew from the outset that the contours of his soul were well matched for the industry.  “I helped my mother-in-law with several of her restaurants before really committing to the industry, which gave me the opportunity to see that I loved meeting and getting to know all kinds of different people,” he reflects.  “The restaurant industry is perfect for that.”

Christos’s lovely wife, Denise, had been living in the U.S. prior to their fortuitous meeting on the beaches of his native Cyprus, where she visited each summer.  The pair courted while Christos studied for his accounting degree, then married in Athens before coming to America on February 8, 1976.  Taverna Cretekou had been established in 1974, and Christos worked there until 1978, when he departed for two years to assist his mother-in-law with several restaurants that she owned.  At that point, he returned to Taverna Cretekou and was later promoted into a management role.

Christos managed the restaurant for about ten or fifteen years until the owner decided to sell the place, approaching Christos first to gauge his interest in buying it.  “I couldn’t have refused—the restaurant was like a baby to me,” he recalls.  “I grew up with this restaurant, and everybody here knew me.  They thought I owned it long before I actually did,” he laughs now.

Despite the very natural and innate nuance of his leadership, Christos had had no prior aspirations to own the enterprise, having always been happy and fulfilled in his position as manager.  He’ll never forget that day in 2005—among the biggest turning points of his life—when he assumed control not only of the restaurant, but of his own future as well.

“That’s when I realized that the American Dream is still alive, at least for me,” he explains.  “I do feel that, in this country, whatever you believe can be done.  After coming to America, I had always kept in my mind the question of how I could become a little bit more successful.  We made investments and saved up gradually, which is what allowed us to buy the restaurant when the opportunity presented itself.”

One pivotal change Christos instituted upon assuming ownership of the operation was to welcome Denise on as a vital member of his staff.  Challenging the commonly held belief that husband and wife teams in the workplace spell certain doom, the two have proven to be a perfect pair in the professional sphere just as they have in a home environment.  “Even if an owner and manager know each other well, one still cannot predict how the other will react when, as in the restaurant business, there are 20 different ways to do the same thing,” Christos explains.  “But you know your wife.  If you have a problem, you solve it together, and I couldn’t imagine anything better than that.”

Through the Papalouizous’ efforts, the business doubled with Denise at the front working as hostess and manager while Christos oversaw the books, purchasing, and other odds and ends.  “I was surprised that we could so quickly improve upon a restaurant that had been run so well for so many years,” he remarks.  “These days, we’re doing better than ever.  As I said, it’s like a baby.  We feed and nurture it, and it grows gradually each year.”

This success can be attributed in large part, as well, to the atmosphere of genuine friendship and family that permeates the Taverna Cretekou experience.  It’s no secret that the Papalouizous love their customers, and they strive to infuse each visitor’s experience with personality and meaning, with Denise floating around the dining room throughout the evening to greet guests.

“We give our customers a smile when they come in, and we make sure that they leave with a smile as well,” says Christos.  “You have to make your customers happy, even with the small details.  This is why I love picky customers.  It’s an opportunity to make someone happy.  And if I can make them happy, my heart is happy.  If someone comes in with a bad mood and leaves happy, then that’s really something.”

Perhaps the reason the restaurant has succeeded so considerably in treating its guests as family is because it is essentially a family-run atmosphere, with two of the Papaloizous’ three children employed.  Their daughter, Maria, manages the books, while their son, Nikos, will cook, manage the front, and run the Taverna if Christos and Denise are out of town.  “He grew up helping me in the restaurant since he was 16 years old,” Christos explains.  “That’s what you call a family restaurant!”

Still, he’s very insistent that his children follow their own path, only welcoming them into the Taverna lifestyle if it’s what they truly want for themselves.  “No pressure,” he says with a smile.  “We’re very lucky.  We’ve found something we enjoy, we work, we make money, and life is beautiful.”

Luck, enjoyment, and the other whimsical currents that have guided Christos’s life are grounded by a strong work ethic, and this balance of work and whimsy has characterized his professional attitude since his very first job.  Employed by his uncle, an electrician with his own business on the coast of Cyrpus, Christos and his cousins would work several hours in the morning and then spend the afternoon playing soccer on the beach.  “I didn’t care about the money because I had my cousins to play with, and that’s all you really care about when you’re a kid,” he recalls fondly.

Christos was also very close with his parents.  His mother was a high school principal and his father co-owned a construction business, modeling for their son the value of hard work and the joy of ownership.  “My parents always believed in me,” he recalls now.  “I was very close with them.  They didn’t know what I would do, but they always knew that I had a good heart and that, down the road, I would be successful in something.”

In fact, Christos’s family contributed to the inception of his success just as much as they believed in it prior to his acquisition of the restaurant.  This contribution was accomplished through the many life lessons he assimilated through observing them, many of which he continues to employ as a leader today.  “My father and mother were very patient people, as is my wife,” Christos points out as an example.  “Having patience—that’s what I’m trying to do now, like my father.  It’s especially important in the restaurant business to know how to maintain that element of peace and calm for both employees and customers.”  Christos also reflects on how his family’s example of dealing with problems in an analytical and overarching fashion had a tremendous influence over him as well.  “They always slow down and look at a problem from all angles, which has been a great thing for me,” he explains.

Christos’s example demonstrates that going with the flow can, as a strategy, mean so much more than simply rolling with the punches.  When combined with an excellent work ethic, it means going through life with a unique and compelling blend of tranquility and conviction, openness and drive.  “My grandfather always told me that, even if we learn something that isn’t readily applicable today, we should put it aside and keep moving,” Christos explains.  “One day, it will come back and help you.  For example, if I knew nothing about accounting and bookkeeping today, I’d definitely be in trouble.”

By going with the flow and maintaining a committed yet laid back management style, Christos has experienced exceedingly low turnover since he took over Taverna in 2005.  “I’m not a difficult person.  Regardless of what life brings my way, I can adjust,” he says, of his general demeanor.  When applied to the workplace, this methodology makes for a low-stress yet high-efficiency atmosphere that exudes mutual respect and family-like cooperation.  “My waiters, my chefs, every single person plays a little part in our success,” Christos observes.  “Not just me or my wife, but every single person.  Everybody makes mistakes, but they are fixable, and it’s beautiful for everybody.  That’s my philosophy.”

Christos’s philosophy also extends further, fomenting young entrepreneurs today with an approach to life that promises not only success, but also the deep-seated sense of joy that permeates his character.  By not only going with the flow but also pursuing those things in life that allow one’s true nature to flow freely through their work, one’s full potential can be reached in a healthy and blissful way.  “Choose your path not because of money or ego, but because of feeling and heart.  Do what you love to do, and do it step by step, laying a firm foundation for your future,” he urges.

By not only going with the flow, but trusting and enhancing it through heartfelt commitment and strong work ethic, one can achieve things that extend far beyond the trappings of a dream.   “Even today, going on six years of ownership, my wife and I will sit down in the evenings after we’ve closed the restaurant,” Christos imparts.  “I still say to her, ‘I never thought something like this would belong to us.’”