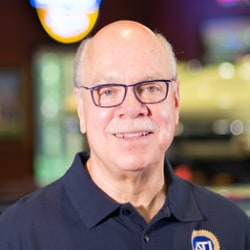 "I understand the value of the course, but are your clients actually benefitting from it?”

Chris Frederick paused for a moment, considering his wife’s question.  As the founder and CEO of Automotive Training Institute (ATI), an organization committed to providing training services to mid-sized automotive repair shops, his primary concern had always been the training programs themselves and not so much their aftermath.  Every satisfaction survey he had administered indicated that his clients loved the one-week management training sessions ATI had recently launched, and that was good enough for him.

“Is their business improving in the long term?  If you visited them a year later, is your impact visible?  Have you really changed their lives?” she pressed.

“Isn’t that beyond the scope of what we do?” he responded.

The answer to that question was yes, but in that moment, Chris’s perspective transformed.  Sure, it was the accurate answer, but was it the right answer?  Was ATI truly changing the lives of the shop owners who had come to the organization in the hopes of turning their businesses around and taking them to the next level?

Interested in exploring his wife’s query about the effectiveness of his training programs, he decided to administer a new kind of survey—one that would measure the long-term impact of the information imparted.  The results were startling.  Only about one in a hundred participants had actually implemented the recommendations put forth by the training programs, and as a result, very few had actually seen tangible gains.

“I’ve always had a passion for making people successful,” Chris remarks now, “so I found this extremely disheartening.”  With that, he decided to hire a coach to follow up with participants post-program to promote actual change.  “It made a huge difference, and the shop owners were actually going home and implementing the knowledge and education they had paid a good deal of money for,” he reports.  “Coaching is so much more important than training, and it was around this time—in the nineties—that we realized we’re really a coaching program.”

ATI was first launched in 1974 and originally focused on technician training, with a shift into management training in 1985 when they started selling accounting software and point of sale systems, assisting shops in the automating process.  The subsequent transition into seminars and training programs led the way for the final evolution into coaching but was originally pursued in an effort to sell more equipment, not necessarily to help people.  The business model was excellent, and the training programs sold out regionally three months in advance.  Chris’s motivation to pursue coaching, then, was certainly not for lack of success.

After the initial plunge into coaching, ATI took on 18 coaches in under ten years as the business continued to double at an unprecedented growth rate.  Chris and his team penetrated North America, opening a call center that spoke to 10,000 of the country’s 150,000 shops monthly and was extremely effective in accessing those individuals who were truly committed to learning and growing their businesses.

Today, ATI has perfected its model and stands at the forefront of its industry.  Its target niche is automotive repair shop owners that generate between $400 thousand and $6 million in revenues annually, with the majority of their clients being little ma-and-pa, family-owned businesses with a handful of corporate clients tossed in the mix.  Though the price tag on their training and coaching program is certainly an investment at $45 thousand, many would argue that it’s worth every penny.  Shop owners get 30 months of intensive and personalized attention focused at improving their business, with the initial focus aimed at fixing cash flow and addressing other financial aspects.

Once the business becomes profitable again, Chris and his team focus in installing systems to help it run consistently.  This is accomplished through addressing customer interaction, whether it’s customer service or sales skills.  The second half of the program, then, concentrates on developing leadership skills in either the principal of the company or the second in command in preparation for the leader’s retirement.

“Most of our clients are baby boomers who started off very small and working over a hundred hours per week doing everything for themselves,” Chris explains.  “They burn themselves out, and their families gets upset because they’re never home.  We get them to the next stage making more money and working only 40 or 50 hours a week, and I can’t tell you the number of times I’ve had wives come up to me and thank me for giving them their husbands back and turning their family business around.  Those are some of the best moments.”

What truly makes ATI unique is the fact that it backs its product with a promise of financial accountability that actually guarantees success.  While there are a number of competitors out there who offer a course here or a course there with no tangible pledge or follow up, Chris and his team offer a two-to-one guarantee, with an average of $80 to $90 thousand in gains in the first year or 30 months to double their clients’ investments.  “Our guarantee makes us more accountable because we’re actually invested in the success of our clients, just as our clients are invested in us,” Chris points out.  “That, plus the fact that we’re a complete solution and not a little a la cart band-aid to a short-term problem, gets us those clients who are long-term thinkers and truly committed to turning their businesses around.”

Since the implementation of the coaching program, ATI has grown to 80 employees, with 50 concentrated in the D.C. metro area and another 30 spread across North America.  After averaging $1 million in annual revenue in the nineties, it now boasts a strong $12 million and has largely managed to dodge the bullet of the recession, maintaining their client base through the trying times of late.

Much of Chris’s success draws from the fact that he has dedicated his professional career to his lifelong passion, refusing to deny his inner pull despite the urgings of others.  Indeed, his father had loved cars, and thus he grew up amongst revered 57 Thunderbirds, beloved Lincolns, and other high-end sports cars that inspired in him a similar devotion.  He enrolled in the University of Maryland for college but was academically dismissed midway through his freshman year because street racing had consumed a considerable amount of his time and resources.  “I was more interested in going to the state park and waxing my family’s Corvette than going to class,” Chris remembers.

After his father forced him to sell the Corvette and return to school, he acquired the 427 Camaro that would steal his heart yet again.  “It was what they call a sleeper,” he laughs now.  “It had dog dish hub caps and no markings, but a big motor straight from the factory.”  Street racing took center stage in his life yet again, and he was making $500 a week.  Still, he invested himself in the college courses that were of true value to him and excelled at his sales, public speaking, and business classes.  After several years, though, he felt he had learned everything he needed from academia and discussed his situation with his father.

“You should be doing something you’re passionate about,” his father had said.  “Don’t worry about making money just yet.”  With that encouragement, Chris found a straight-commission position selling engine analyzers, which he embraced wholeheartedly.  After several years there, however, he found himself disagreeing with the integrity of the company and felt as though he could run things better himself.  Thus, at the age of 24, he parted ways with the company with four other salespeople following in his wake, and in 1974, ATI was born.  “It was my first company and I had no idea what I was doing,” Chris recalls.  “I just knew I could do better in representing the interests of shop owners.”

As ATI continued Chris’s legacy of selling engine analyzers, it became clear that his people skills would serve him well in years to come.  “I came into the business world at a young age and with the ability to motivate other people to act,” he observes now.  “I can figure out what people want, and I can help them get it.  Through my communication and sales skills, I was able to sell people on a concept, and this was pivotal in shaping the company and its future success.”

The most fascinating thing about Chris’s skill set, however, is that it is just as cultivated as it is innate.  “I’m definitely an introvert, and I didn’t like speaking or being in front of people,” he remarks of his childhood.  “I didn’t like networking or social situations in which there were a lot of people.”  It wasn’t until he tackled his public speaking class in college that he was able to overcome this obstacle that stood in the way of what he hoped to accomplish in life, and his success in doing so is truly remarkable.  “I realized that I had this immense desire to accomplish a lot in life and that I was going to have to do things I wasn’t crazy about in order to do so,” he adds.  “I really did fake it until I made it.”

Especially in his earlier years, Chris would literally turn himself on every morning and then off again every afternoon at five o’clock, much to the confusion of friends and family who were privy to both versions of him.  “At some point, you really assimilate this new version of you into yourself and it ceases to be an effort,” he explains.  “I became more comfortable with it, and I saw that I was helping people, and this really helped motivate me to get out there and push the limits of my comfort zone the way I did.”

In advising young entrepreneurs entering the workforce today, Chris cautions against emulating his own decision to skip out early on his education.  “Stay in school,” he urges.  “Even though you may read about people who become extremely successful without finishing, the odds are not good.  Get your education and supplement it through interning or experimenting in businesses you have a passion for.”  Broadening this suggestion, he details the importance of weighing the long-term outcome of any decision.  Embrace those choices that expand your options, and steer away from those that will impose limitations upon you.  “Try not to let yourself get tied down,” he says.  “It’s a terrible thing for young people to get boxed in and stop taking risks.”

In following the example of his own professional advice and actively pursuing change through implementation, Chris is now looking toward the future as he frees up more of his own time to focus on growing ATI.  It is clear, however, that this drive stems from the opportunity to transform rather than the opportunity for self gain.  “When we were regionalized, we had an impact on four or five hundred shop owners,” he explains.  “Now we impact around twenty thousand between our one-day seminars and our coaching program.  My father always said that the more people you help, the more you’ll grow, the more money you’ll make, and the more impact you’ll be able to have.  In envisioning the future of ATI, it is with this principle in mind that we press forward.”