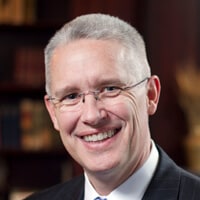 The Culture of a Connector

As a child, Chris Helmrath always knew he was loved.  His father, a neonatologist who also graduated from a top ten graduate business school, however had his own unique way of showing it.  “He’s not the kind of person you sit around with on a Sunday, watching sappy movies and talking about your girlfriend,” Chris laughs.  “With him, it was always about achieving your potential and not accepting average results.  We were forbidden from getting a ‘C’ on our report cards and could not watch television unless we read books, which he would quiz us over to make sure we had done a good job.”

Indeed, Chris and his siblings learned the value of a strong work ethic from the beginning, always understanding that failure was not an option.  Now the managing partner of the northern Virginia office of the SC&H Group, LLC, Chris has cultivated this lesson over the years into an enduring and powerful frame of mind that lends a unique edge to all that he does.  “I’m not willing to accept mediocrity,” he readily acknowledges.  “I push and push and push.”

Chris’s upbringing, however, was by no means all work and no heart.  In fact, he remembers the stories of his grandfather’s examples of unwavering kindness as among the most influential lessons of his life.  His grandfather had dropped out of school in the eighth grade to support his mother and sister after his father’s untimely death, later overcoming all odds when he was named President of the Passenger Division of the Illinois Central Railroad.  He was also one of the original founders of the Sugar Bowl in New Orleans.

Upon Chris’s graduation from high school, his grandparents gave him a framed print entitled, “The Art of Getting Along,” which advocated compassion, friendliness, and patience in all that one does.  “He knew everybody in New Orleans and he shook everyone’s hand,” Chris remembers.  “It was remarkable how he connected in the business community without a formal education, accomplishing such tremendous things with his charisma and personality.”  Today, Chris’s leadership philosophy unites the work ethic learned from his father with the benevolence learned from his grandfather and lends an invaluable contribution to SC&H, both in terms of its culture and its bottom line.

SC&H is a conglomerate of 265 financial professionals who specialize in developing accounting, tax, management consulting, and investment banking solutions for an extensive range of clients.  Founded in 1991 in Baltimore, the firm has offices in the Baltimore and D.C. metropolitan areas with a smaller office in Atlanta, and it serves clients across the Unites States.  The firm’s revenues are proportioned equally between its audit, tax, and consulting practices, and its revenue growth rate has averaged over 25 percent annually since its inception.

Since Chris signed on with the firm in 2005 , SC&H has grown by 2.5 times across the firm as a whole.  The Tysons office, however, has followed a different trend, reporting fewer than 10 employees when Chris started and now clocking in at just fewer than 40.  “We see this office as probably the greatest growth opportunity SC&H has right now,” he reports.  “Thus, we’re very focused on investing, hiring, and getting in the market to grow as much as possible.”

When Chris began with SC&H’s Baltimore group, he had no idea he would later be asked to serve as managing partner for northern Virginia.  Certainly his business development potential was impressive and untapped, having taught in 2 graduate schools for fifteen years and also building a strong presence in financial services and in the non-profit realm for his contributions to the surrounding community.  Such alliances speak to a skill set often lacking in the public accounting world—one that blends the diverse challenges of managing people, managing growth, and maintaining market presence.

Chris’s career in the financial services industry first began with the acquisition of banks for a Fortune 100 company based in Chicago, originally coming to Northern Virginia to buy failed S&Ls and build the brand out into Maryland.  Early on, he was quickly taken under the wing of the regional President, who became a trusted mentor by opening many doors for Chris along his path toward success.  “John gave me opportunities that a 23-year-old should never have,” Chris laughs now.  “Knowing I wanted to go to graduate school, he sat me down in his office one day and said he wouldn’t promote me until I got my MBA.”

Two days later, Chris took the GMAT and quickly enrolled at Loyola University, graduating first in his class of several hundred despite balancing school and work with the challenges of becoming a father.  Though Chris eventually departed from that industry after deciding that it held no long-term viability for him, he never forgot the invaluable tools he had collected through the experience.  “I’m a connector,” he remarks now, commenting on his respect for the role of relationships in personal growth.  “I have learned that every relationship has a purpose in your life, even if you may not understand it today.  Never forget who people are, because it is people that will help you get where you’re going.”

Chris later joined the accounting and tax group of American Express, which was the ninth largest accounting firm in the U.S. at the time.  Such opportunities lent him a tremendous wealth of knowledge, not only in the technical aspects of his trade, but also in employee development, training, and group management.  The resulting alchemy of expertise would prove to make all the difference for Chris and his career at SC&H.  “If you watch any business evolve, you need people that are growers and people who are maintainers,” he points out.  “I’m not a maintainer, I’m a grower.”

Drawing upon his extensive and textured expertise in investment banking, Chris now serves as President and Principal of SC&H’s FINRA-regulated merger and acquisition services practice, SC&H Capital.  This entity entails ten professionals focusing in investment banking, business valuation, strategic planning, debt, and capital raise, offering a truly unique service in the field and serving as a testament to the creative, outside-the-box culture that SC&H is proud to call its own.

Above all else, SC&H is about culture.  “Culture is our number one corporate objective,” explains Chris.  “It’s the first litmus test in examining any next step for us, be it a possible acquisition or something else.  If it doesn’t fit within our culture, we won’t do it.”  Through its innovative and imaginative method of managing people and creating environments and career paths, the firm challenges the traditional mold of the accounting industry’s accepted firm structure in virtually all that it does, and this capacity toward originality has won SC&H an employee turnover rate which is about a third of the industry-wide figure.

Respect and integrity are of paramount importance for Chris and his team, and this entails a very unique attitude toward both clients and employees alike.  “At SC&H, no employee has billable hour goals,” Chris reports.  “Our job as partners is to monitor and manage across the line and make sure we’re delivering to our clients what they need.  We focus on not burning anybody out and are continually assessing every situation to ensure that we have the right resources at work on each job.”  This attitude allows the firm to skirt the bureaucracy that so often strangles the work-life balance at other firms, engendering an atmosphere of collegiality and equality.

This company culture allows the partners at SC&H to develop lasting and genuine relationships with their clients just as diligently as they develop products and solutions that work.  “We want the client to be as delighted about the work product we’ve done as they are about working with us,” Chris explains.  “Churning out employees and clients is simply not what we do here.  At the beginning and end of each day, we ask ourselves, are we doing the right thing?”

In ensuring that the answer to this question is a perpetual and resounding yes, Chris sees himself as a servant just as much as he sees himself a leader.   Honoring the mantra, “Do what ought to be done but would not have been done unless I did it,” he holds that there is no job he’s unwilling to do and no statement he’s unwilling to make.  “Everything we touch leaves a mark,” Chris observes.  “That’s what I enjoy most.  If you can help someone see something, or see through something, or think better and differently about something, that’s my favorite part of the day.”

What makes Chris’s philosophy so unique, then, is its keen awareness of each person’s ability to affect the world and the essence of responsibility that necessarily accompanies that reality.  “No one human being can motivate another,” Chris points out.  “You can only create an environment in which one motivates himself.  We all have the ability to create an environment that affects others, and using this power to maximize someone’s potential—that’s what it’s all about for me.”

If his father imparted the value of work ethic and his grandfather imparted the value of kindness, Chris draws from his mother the passion it takes to truly affect environments in a meaningful and lasting way—through education.  “With a father who taught in a medical school and a mother who was a kindergarten teacher, teaching became such a critical part of my world,” he remarks now.  When he first began teaching at Loyola University, it quickly became apparent that teaching was a true passion—a way to give back.

Chris’s teaching career spanned across 2 graduate business schools and 19 years, where he ultimately ran the MBA Capstone Program for the Carey Business School at Johns Hopkins University. Reflecting back on instances when prior students of his would approach him outside of the classroom to let him know how meaningful his lessons had been, Chris considers such moments to be lessons in themselves.  “That’s a ‘Wow, I did something right’ moment,” he emphasizes.  In 2003, the Johns Hopkins University named him the top teacher in the business school by granting him the Excellence in Teaching Award, and he considers this to be one of his greatest professional achievements.

“At SC&H, we believe that giving back is a fundamental piece of who we are.  I was very fortunate, having a family that taught me so much and now being able to give back through teaching.”

So, when Chris is speaking to a classroom full of entrepreneurs poised to venture into the workforce, what invaluable idioms does he choose to impart?  Indeed, the resounding message that threads through each life lesson he strives to impart is the importance of attitude.  Through attitude, one can grasp work ethic by wanting something more than the next person and acting accordingly.  Through attitude, one can grasp heart by treating others as you would want to be treated.  And through attitude, one can take the raw materials of life and mold environments that engender success, happiness, and progress, both for others and for themselves.  “So many people are frozen when confronted with ambiguity,” he says.  “Dealing constructively with ambiguity is really all about attitude.”  By wielding attitude in this manner, one can hope to enter the business world with grace and gusto, fervor and poise.