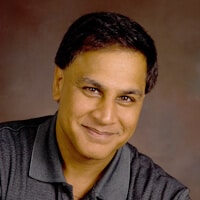 As a young boy spending the summer with his grandparents in India during monsoon season, Suresh Gursahaney yearned for the singular joy imparted by such an interlude, and he was going to do something about it.  His maternal grandfather was co-owner of Bush Radio, the second largest electronic radio manufacturer in India, and Suresh would follow him to work each day, enamored with the art of business ownership as much as with the art of electronics.  He learned much about both as he sat beside his grandfather and built an AM radio, which he took home that night and hooked up to the big antenna outside of their apartment building.  Each night thereafter, at three in the morning, he would wake up to tune in to WABC out of New York for those twenty blessed minutes—twenty minutes of American music.

“That’s how I got into electronics,” Suresh remarks.  Now the President and CEO of MicroAutomation Incorporated of Virginia, Suresh’s story has followed a unique path that has successfully synthesized family expectations with individual calling.

Suresh’s father had come to America to attend Purdue University before returning to India to start a family through a traditional arranged marriage.  He and his new wife then returned to America for a fresh start, where he worked for GE.  As the patriarch of the family, Mr. Gursahaney took it upon himself to bring his parents and each of his eight siblings over from India, one by one.  This made for an exceptionally enriching childhood for Suresh, who was the first Indian born in Louiseville, Kentucky.  “I had the opportunity to live with each of my cousins for six months at a time, and my paternal grandfather was the one to always check my homework and help me learn math,” Suresh remembers.  “As a result, my extended family has an incredible bond.”

Mr. Gursahaney believed firmly that his children should earn whatever they received, so Suresh learned the value of hard work at an early age.  At 12, he picked up a paper route around the neighborhood, and he hasn’t stopped working for more than two weeks at a time since that day.  In college, he would work during holidays as a dishwasher or at McDonalds, until he got a job working the nightshift at a computer company.  “I learned programming in my spare time in the middle of the night as I monitored jobs running on the mainframe,” he recalls.  “By the end of the summer, I had written a blackjack program.”

His family had always expected him to pursue a career as either a doctor or a lawyer, but Suresh felt an insatiable draw toward the technological realm in which he had dabbled.  One of his uncles worked for IBM at the time, and a family gathering over Christmas of his senior year of college at Duke University presented the perfect opportunity to introduce his own interest in such a career path.

“Don’t bother applying,” his uncle had said discouragingly.  “Your GPA is a 3.25, and they won’t even consider anything under a 3.75.”

Knowing that his computer science and engineering coursework GPA was actually a 3.9, Suresh heard these words not as a ultimatum, but instead as a challenge, resolving to apply to each and every IBM location in the United States.  When he hadn’t heard anything by March, he was about to contact his previous place of employment when he suddenly received the call that would forever alter the course of his future.  That summer, he was given a three-month contract with IBM’s Federal systems division, and that one chance was all he needed.

Fresh out of college and ecstatic at the opportunity to pursue his dream, Suresh hit the ground running at IBM and soon noticed that his work ethic far exceeded the pace of the corporate culture that surrounded him.  Remaining impervious to the influence of his surroundings, he maintained his dogged commitment to his work until the summer ended and he was called into his boss’s office.  “You know, there were a couple months there that you were the only one contributing to this organization,” his supervisor told him, supplementing the compliment with an offer of full-time employment.

Suresh had promised his father and grandfather that he would get his MBA promptly out of college, but IBM wouldn’t take no for an answer, so he made a deal with Mr. Gursahaney that he would attend business school two years later in order to take advantage of this immediate opportunity.  “Once you start working, you’ll never want to go back to school,” his father had said, but he reluctantly agreed.

Within two years, Suresh was already running a full project at IBM, but true to his word, he was admitted to the MBA program at Carnegie Melon.  His supervisor, however, pleaded with him to defer his plans one more year, which Suresh agreed to do.  The following year, he was granted an educational leave of absence to fulfill his promise to his family, after which he resumed his position at IBM for another four years.  The company was in its heyday at the time, but Suresh sensed whispers of mortality in the framework indicating a mentality that wouldn’t survive in the marketplace for much longer.  “They seemed to believe that customers would buy the software just because it was developed by IBM, or that their products would dictate the market instead of vice versa,” he remembers.

Working for the applications solutions division at the time, Suresh was spearheading a project to automate the call centers and reduce costs using computer telephony integration for Northeast Utilities.  Gauging market demand and figuring that the resulting piece of software could be developed as a more universal product instead of an individual solution, he approached management with the idea but was promptly turned down on the grounds that their division didn’t handle such matters.  Undeterred as per his usual, Suresh then enlisted Northeast Utilities itself to tout the idea, which IBM then embraced with open arms.

Though pleased that the software would be shrink-wrapped and sold, Suresh’s faith in the company as a whole was waning, and he seized the opportunity to strike out on his own in 1991.  His vision was to launch a company that would serve as the middleman between IBM and the customer base, offering the kind of innovative and solutions-oriented service that he believed in.  “Customers were moving into a mode of wanting to buy a solution, not a product,” he explains.  “There was a gap between the product put out by IBM and the solution customers were looking for, and we arose to fill that void.”  With that, MicroAutomation was born.

MicroAutomation serves the technology and automation needs of call centers through a wide range of services, whether it be reporting, interactive voice response systems, or tools that make agents more productive.  Since its inception 20 years ago, Suresh has migrated beyond the bounds of IBM products to adapt a more vendor-agnostic approach that allows them to readily adapt to the environments of their clientele.  “We’re a system integration firm rather than a product firm,” he points out.

Suresh’s father, brother and sister all pursued and maintained professional journeys through the corporate, big company realm, so Suresh’s decision to veer off the beaten path and pursue a small business experience was met with much initial dismay.  “I didn’t have much support,” he concedes, “but this only made me work harder.”

During its first twelve years, MicroAutomation was content to establish itself as a small yet reliable firm of just under a dozen employees with revenues of about $1.7 million annually.  “I had very little opportunity to engage in strategic or tactical thinking because I was so immersed in the day to day processes of keeping the organization running,” Suresh reflects.  “Essentially, I was the sole decision maker, and all the projects ran through me.  I soon found, though, that running the company at that size took too great a personal toll, and it was time to grow so that we could get a management team firmly in place.”

To instigate the growth he envisioned, Suresh first assembled an advisory board and then supplemented this input by joining a CEO coaching organization called Vistage, which proved invaluable to his future endeavors.  “The program exposed me to a number of CEOs that, surprisingly, were facing many of the same challenges I was,” he says.  “I then made it my personal goal to grow the company to a point where I could extricate myself from daily operations and shifting my focus back on what I left IBM to do in the first place, which is architecting solutions.”

Since that resolution took effect, MicroAutomation underwent a steep growth curve and now employs a team of over thirty individuals, with revenues clocking in at slightly over $8 million.  “Establishing a management team is exceptionally arduous in that each individual has to really know the business before you release the reigns,” Suresh points out.  “You have to feel comfortable that that person is committed to the business and will fulfill your vision of where the company needs to go.  Still, we have finally reached that point, which allows me to really immerse myself in what I love to do—strategies and solutions.”

It is with this commitment to his passions fresh in mind that Suresh offers several guiding principles to young entrepreneurs entering the business world today.  “Whatever you’re going to do, do it for the right reasons,” he stresses.  “Don’t take a job just because it’s the first one that comes along or because it happens to have a bigger paycheck.  Do something you love.  You’ll enjoy your life more while also being more dedicated to your work, and as your expertise develops, so will the monetary rewards.”

Suresh pairs this idiom with a healthy dose of forward thinking, which can always be reinforced by the influence of a mentor.  “Plan for the future now and don’t wait to begin saving for retirement,” he says.  “Make choices that will pay off in the long run, even if they boast less short-term glamour.”  For anyone pursuing a self-directed solution, adhering to such principles promises a path that is not only successful, but in line with the inner drive through which we might achieve our highest potential.