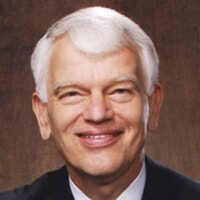 The Amplification of Impact

Upon taking the helm as the fifth president of George Mason University in 1996, Dr. Alan Merten contemplated the many successes of his predecessor, Dr. George Johnson.  Prior to Dr. Johnson, Mason had already seen three presidents in just six years of existence as an institution independent from the University of Virginia.  Over his subsequent 18-year tenure, Dr. Johnson cultivated an environment of what Alan describes as “academic and institutional entrepreneurship”, bringing the university to the brink of the 21st century as a leading institution in northern Virginia, known for feeding top candidates into the science, business and technology sectors in that region and beyond.

Alan’s challenge was now to take Mason to the next level.

“Dr. Johnson’s approach had created a situation where any flower could bloom,” Alan remembers today.  “He created the entrepreneurial George Mason University, and we had to keep that spirit, but we also had to create a certain order out if it.” Alan asked himself not just, “How do we survive?” but, “How do we thrive?”

In 1996, Mason had approximately 21 thousand students.  As of 2011 that number has grown to over 32 thousand, and the number of applicants continues to rise steadily each year.  During Alan’s tenure the university has built over twenty buildings across three campuses, and $5 million in sponsored research has grown to $120 million.  “It’s a different place,” Alan allows today.

Born and raised in Milwaukee, Wisconsin, Alan earned his undergraduate degree in mathematics at the University of Wisconsin, where he was Air Force ROTC.  After graduating, his first assignment in the Air Force was to obtain a master’s degree in computer science from Stanford.  Armed with this degree and still in his early twenties, he was first assigned to the Pentagon in the Air Force Data Services Center, then as a military aid to President Johnson.  Later he would take on more responsibility, working in the White House as a social aid.  Over three years these fascinating and demanding positions led him to become friends with Brian Lamb, founder and Chief Executive of CSPAN; Edward Mathias, Managing Director of the Carlyle Group; and others.

“Not much more can be said about my time at the Pentagon and the White house other than that it was a great experience, unlike any other I have had,” he says.  “But while working there I found myself getting more and more interested in various aspects of computer science and statistics.”  Following his four years in the Air Force, Alan returned to school, starting a PhD program in computer science at the University of Wisconsin.

While academic life as a career path was not something he had planned on, it became possible as he finished his PhD studies.  Considering career options such as computer vendors, research groups and defense contractors, he ultimately chose academia and took an offer from the University of Michigan to teach there in Engineering and Management.  It was not long after that he made the decision to take on more academic administration responsibilities, becoming an Associate Dean for Executive Programs at Michigan.  After being at Michigan for sixteen years, he became dean of the business school at the University of Florida for three, then accepted a similar position at Cornell for seven.

With mounting experience in higher education administration, Alan came to a point where he found he had to decide whether to go back to the faculty, or to take the natural next step in his career as an administrator to become a university president.  The decision would soon become much easier, as opportunity knocked in the form of a search firm looking to fill the presidency of George Mason University.

“It was exciting,” he says.  “I got involved in the Mason search, and as I went through the process it became clear to me that it was something I wanted to pursue…  And that became possible.”

Alan quickly realized that he was well-suited to the position.  The search firm initially showed interest in him due to his background in computer science and his experience as a business school professor and dean.  Together, these features made him a perfect fit for the northern Virginia environment and particularly Mason, with its reputation for producing highly qualified individuals in science and business who often found great success in Washington and beyond.  Further, Alan had government and military-related experience even beyond his time in the Air Force from consulting for the military and other government bodies during his time as a professor.

As the process progressed through the end of 1995 and into 1996, and the number of finalists narrowed to ten and then four, Alan became confident that his academic background was consistent with the needs of the next level of George Mason University.  “I had already begun to feel the synergy between what I wanted to do and what George Mason and the greater Washington area had to offer,” he says.  In June of 1996, George W. Johnson retired after eighteen years as University President, and Alan was inaugurated the following month.

Now, for President Merten, there is no such thing as a normal day.  Indeed, every day, every hour looks different from the one preceding it.  He describes his job by saying, “I am responsible for a $900 million organization every year.  With an approximately $700 million operating budget, and a slightly less than $200 million capital budget, things start to get a little complex.  In fact, we’re spending $4 million a week on capital projects.”

While Alan and his team say Mason is not a business and therefore isn’t operated as such, they do run it in a “business-like fashion” to ensure stability, efficiency, and strength.  In addition to the day-to-day responsibilities presented by thirty-three thousand students, six thousand employees, over one hundred buildings, and one hundred and forty thousand alumni, Alan must still envision strategies to address the greater challenges his university faces: how to manage a constantly increasing number of applicants, how to grow the university with uncertain support from the state assembly and governor, and how to enhance the university’s capacity for high-quality research.

Despite these innumerable responsibilities, Alan is committed to being remarkably present in the lives of students, faculty, administrators, and university staff.  In addition to understanding all aspects of a modern university, even those various aspects that may differ from the academic programs he has experienced himself, Alan stresses that a university president must also have an appreciation for the interests and demands of the students and for the communities that the university is a part of.  “And that appreciation must be genuine,” he adds.  Those individuals who become academic administrators without that appreciation, who may try to fake it—those people will have failures.”

The students at George Mason love that Alan is so visible.  He models this leadership quality after a central theme of a particularly influential book in his life entitled, In Search of Excellence, by Tom Peters and Robert H. Waterman, Jr.  To Alan, it is of the utmost importance to be visible among the students, to talk to the students, to listen to the students, and to be a part of their lives, with them an integral part of his in return.  To this end, he participates in the two-day-long freshman move-in every year, introducing himself to parents and students alike, and he relishes their reactions.  He attends as many basketball games as he can, both home and away, and as he sits at half court with his wife, a stadium of raucous students will regularly chant his name.

Though many academic professionals have to learn the importance of such integration over time, it has remained a cornerstone of Alan’s philosophy since the beginning.  “Through my academic career I always felt a need and an interest in getting to know the students outside the classroom,” he says.  “When I was dean at Florida, my wife and I would invite students to our home.  When I was dean at Cornell, it was the same.  We’ve always believed that students’ experiences should extend far beyond a series of classes.”

In his duties managing faculty and staff, Alan can be found implementing the same philosophy of “management by walking around,” although he tends to take a more hands-off approach with those who work for him.  He believes in giving people responsibilities and getting out of the way.  “I try very, very hard not to micromanage,” he notes.  “I may have to bite my lip or other parts of my body, and I’d love to tell them how to do it, but I’ve learned over the years not to, and to trust people.”

Looking at the university community as a whole, Alan says it is important to him to have respect for and a belief in people’s abilities at all levels within the organization.  “In a complex organization,” he says, “the people at the top may be important, but the people far down the hierarchy are equally important.”  Whether it’s the campus police, the maintenance staff, or a physical plant person, he makes it a point to walk up and thank them for their hard work.  In his experience, this is not merely beneficial to his ability to manage, but it is integral to the functioning of the university as a whole.  “To not do this is to miss an opportunity,” he stresses.

In considering his tenure and the evolution of George Mason University as a whole, Alan sees a distinct progression.  “My case is an example of one leader doing one set of things, and the next leader having to do the next set of things,” Alan says.  Recalling a recent interaction with the former president, Dr. George Johns, at the Mason Inn, a new hotel and conference center and one of the twenty or so new buildings constructed during Alan’s tenure, Alan remembers a particularly telling exchange.  “I walked up to Dr. Johnson and I said, ‘George, what do you think of this?’ We both took a moment to look around us, and he then looked at me and said, ‘I could never have done what you’ve done.’  I looked back at him and said, ‘George, I could never have done what you did.’”

Though Alan’s journey with Mason is far from over, it is already undeniably apparent that he will be remembered for his unique capacity to build institutions, not just in terms of the number of buildings he has constructed or the amount of fund-raising he has directed, but more so in the very legacy of the entity itself.  Having invested so much of his focus, energy, and self into the institution, his individual impact is read in the amplification of Mason’s impact as a whole.  “Institutions consist of buildings,” says Alan, “but institutions may also be understood in terms of the organizations we’ve created, the intellectual property we’ve developed, and the students who have succeeded.  That is institution building, broadly stated.”