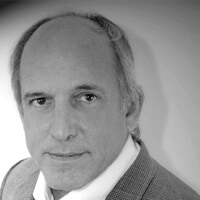 A Blueprint for Success

“Every horrible thing turned out to be a good thing,” says Chris Lessard, as his mind traces back over the events of his life and connects the dots.  When he first entered the architectural industry at age 27, his world seemed as though it was falling apart.  Recently divorced with a young child and not a clue as to how to navigate such terrain, he recalls the hopelessness that permeated his perception.  “Then I saw an ad in the Washington Post for a hotshot designer for a group based out of Philadelphia,” he recalls.  “I went in to interview, and they asked me to run their D.C. office.”  Now the CEO of Lessard Design Inc. and the designer of several hundred thousand units and counting, Chris’s legacy is a testament to perseverance and faith, hard work and heart.

“As an architect, you have a chance to engender real buildings that encapsulate someone’s experience, like the joy of moving to a new place,” he marvels.  “This company has advanced so far beyond the buildings themselves.  We’re about the socialization of the buildings—the connectivity, the experience, the impact.”

Of course, it was not all fun and games from the moment he decided to answer the ad in the paper.  Though he did some research before accepting the position, he remained wholly surprised by the conditions he confronted when he showed up for his first day of work.  Indeed, the office was minimal and the staff difficult.  “I thought I had just screwed up big time,” he remembers.  “I thought my career was over!”

What’s more, Chris had taken a pay cut to accept his new position, which worsened that initial blow.  “When it comes to knowledge versus money, I always opt for knowledge,” he explains.  “Let money take care of itself.  I took that pay cut because I reasoned that I would not have incentives otherwise.  I didn’t know it would work out, but hey, I was divorced and could take those chances.”  Though it is widely understood that great rewards often require great risk, life’s responsibilities often preclude the possibility of taking these risks.  From the ashes of Chris’s despair, however, came the opportunity to take one such risk.  “In the end, it never turned out to be a pay cut,” he says.  “Rather, it turned out to double my pay, and with the learned knowledge added to that, the experience has been immeasurable.”

Like its founder, Lessard Design is multi-faceted and textured.  Though Chris considers himself an architect first and foremost, the various groups housed under the Lessard Group name are investments that lend long-term stability to his portfolio.  One such offshoot, Lessard Commercial, deals with retail, office, and auto dealership space, while another, Lessard Private Limited, lends an international presence to the firm that assists in segregating liability and establishing separate internal business units.  Still another component, Metropolitan Development, specializes in apartment construction, while various other sub-groups tend to leasing and asset management, one-off real estate deals, and the like.

Lessard Design was first launched as CJ Lessard Architects and Land Planners in 1986 after Chris left his position running a branch division for The Martin Architectural Group, a firm based out of Philadelphia.  He had served in that capacity for four years, working 80-hour weeks doing the designs himself and essentially cultivating the identity of the firm.  Though he had the opportunity to venture out on his own on several occasions during that interval, he held out until the time was right, rendering the transition fairly easy and allowing him to earn a profit after the very first month.

Despite this smooth and seamless progression, Chris found himself at another crossroads with the advent of his second divorce.  Following the guidance of an attorney, he quit CJ Lessard Architects and borrowed $100,000 from friends to launch Lessard Architecture and Land Planners, offering up his own architectural services as collateral.  “Society trains you to think linearly, but that’s detrimental,” Chris reflects, drawing upon the strategies of his own trade and applying them to the strategy of life.  “You have to think outside the box.  Many rules prevent you from getting ahead, so you have to analyze them and push back where appropriate.  Suppose you need money to accomplish what you want to accomplish?  This is not insurmountable.  Find opportunities somehow by rearranging the order of what you do.”

One particularly compelling aspect of Chris’s approach is his ability to harness and abate the element of risk through the tools of self-assurance and attitude.  “The thing is that if you believe in yourself, you’ve automatically eliminated a lot of the perceived risk,” he points out.  “This doesn’t mean it will always work out, but if you’re engaged and flexible enough, you’ll bounce around and get the right answer eventually.”

Today, the Lessard companies are 70 employees strong with a management group of four.  The efforts of this team are supplemented by a number of contractors hired to oversee the enterprise’s actual projects.  Though the majority of its work occurs in the U.S., it also serves markets in India and Saudi Arabia in an effort to reduce cost basis by increasing their market share after the recent economic downturn.

Chris’s career is perhaps most directly influenced by his father, who was a homebuilder.  After graduating early from Virginia Tech, Chris entered the industry as well, supervising his father’s housing construction in Richmond.  “Most people don’t realize that homebuilding is cash flow management,” he reflects.  After analyzing the business’s profitability, he recommended that they close up shop—a fortuitous suggestion in light of the fact that his father was diagnosed with cancer six months later and passed away soon thereafter.  “I was able to get that business shut down and to get into architecture, and although I didn’t continue directly in that industry, I still use the knowledge it imparted everyday,” he says.  “I’m able to understand not only the business of my client base, but also the numbers of the Washington market.”

It is precisely this understanding that sets Chris and his team apart from their peers, identifying Lessard Design as a key shaper and assessor of value in an industry that is so often unpredictable.  “My experience out of school allowed me to really understand the value of things—not just the process of planning or architecture, but the logic and reasoning behind it, as well as the financial aspects,” says Chris.  “To this day, when people come to me looking for guidance, we not only achieve their goal, but we explain how and why.”  Therein lies the uniqueness of Lessard Design.

The integrity of the group’s expertise is matched, honed, and balanced by the integrity of its character, which is coordinated by a core value system—a trait Chris lists as number one in importance.  “There are too many decisions in life, and you cannot focus on the hard ones unless you have a basis for properly and effectively addressing the smaller ones,” he illustrates.  “You have to have core guidance to leave you time to handle the hard complications your life will undoubtedly throw you at some points.”  In a world where so many people strive to please everybody, Chris emphasizes the importance of having the guts to commit to a set of values, as there will always be someone who thinks these values are wrong.  “Sometimes you have to take chances, and it’s hard to know if you’re right.  The only thing that will give you courage is your core value system,” he reflects.

This value system, combined with Chris’s willingness to take big risks, results in a decision making style that is at once freeing and profitable.  Reflecting on people who dedicate large amounts of time trying to make the “right” decision, he points out the illogicality of such an approach.  “With the time they spend doing that, I make ten decisions.  Suppose two of them are the wrong decisions.  Still, it puts you much further ahead than the other strategy does.”  As well, he points out that, if a decision is identified as the “wrong” thing, one can simply turn around and make it right, which speaks to the protean character of life and again harkens back to the notion that one is not bound to a linear path to success.

According to this ideology, success is also lent through perception and an acute awareness of the term’s more nuanced mechanics.  “So much of success is about helping everyone feel a part of it,” Chris says.  “When confronted with a problem, you must find a solution that makes everyone look good.  If you can get there, you’ll win.  If you can’t, you’ll lose.  People have their own sets of issues, needs, and requirements.  Helping everyone to feel like a winner will, in turn, allow you to win.”

This ties in strongly with Chris’s leadership philosophy, which places a strong emphasis on the prominence of passion and goals in the workplace and in life.  Identifying the reality that most people fail to firm up their goals into a concrete and objectively measurable outcome, he strives to structure the good intentions of his employees into notions that are firmly sketched in outline, detail, and deadline.  “That is truly the key for people coming out of school—to have concrete goals,” he emphasizes.  Along a similar vein, Chris presses the importance of lofty goals—what he terms “multiplier” goals because their strict parameters engender innovative and out-of-the-box solutions.  “Some of my goals force us to figure out new ways to do things,” he acknowledges.  “By being unwavering in our sights and pressing for new solutions, we are challenging our company to evolve.”

Chris not only embraces these elements of risk and creativity in his professional life, but in his personal life as well.  “The more theater you put in your life, the more you can really impart life lessons to those in it,” he reveals.  Whether it’s plotting an elaborate date for his wife or staging an incredible coming-of-age ceremony for his son, he invests an insurmountable amount of time and energy into stretching the boundaries of reality and thereby creating new realities—realities that are rich with meaning and reflection, self-awareness and possibility.  “Success leaves trails,” says Chris, quoting the compelling life coach, Tony Robbins.  Just as Chris himself has charted and followed the route to success as demonstrated by others, so can today’s young entrepreneurs chart and follow the route to success as demonstrated by him.