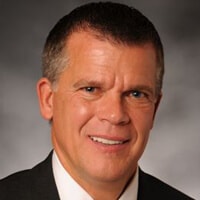 The higher-ups at Van Dorn, now Demag Plastics Group, had originally told Bill Carteaux that they were not going to entertain any internal candidates to fill the vacant position of President and CEO of the Americas.  “If you want an opportunity, you’re going to have to convince our CEO in Germany that you’re capable of doing this,” they had told him.  After traveling to Germany only to have the CEO cancel their meeting, Bill then pulled a series of maneuvers to obtain a twenty-minute window with the man several days later, which proved enough to get his name thrown in the hat.  Maximizing his nuanced knowledge of the business through the proactive and thorough creation of a discussion document, he had come to his first interview with copies of the piece for each person at the meeting.  The document had predicted the questions of the interviewers to a tee, winning him the position over 28 other candidates worldwide.  “No one else was close,” he was told.  You can bet that, when it came to dogged determination, no one else came close either.

If one were to talk to the people who knew Bill when he was young, they would tell you he was always in charge.  Born the youngest of four children and raised in a small farming community in northeast Indiana, it was almost as if the renowned Midwestern work ethic had been ingrained in his soul long before he got his first job at the age of fourteen bailing hay for a buck an hour for the preacher across the road.  Now President and CEO of the SPI Plastics Industry Trade Association, Bill’s journey is a testament not so much to being in charge, but to taking charge, living with a fierce perseverance that has carried him to where he is today.

SPI is the largest plastics trade association in the country and represents the broad interest of the entire industry, uniting material suppliers, processors, moldmakers, and equipment manufacturers throughout the entire value chain of the industry.  Advocacy remains a primary focus of the organization as it targets plastic-specific federal issues as well as tax and healthcare-related work coalitions.  In this capacity, SPI is recognized as the preeminent organization worldwide for working on food contact plastic applications with the FDA.  Their influence extends laterally to state activity through the determination of public policy, as well as internationally to address trade issues that specifically impact the plastics industry.

Beyond advocacy, SPI also focuses on communications and marketing within the industry regarding the industry, now aiming to extend these lines of communication externally to the general public as well.  This plethora of efforts is punctuated by SPI’s ownership and management of various trade shows and conferences throughout the year, with its centerpiece being the triennial occurrence of the largest plastics trade show in the Western Hemisphere.  The show traditionally umbrellas one million square feet of exhibition space and 70,000 attendees from around the world assembling to buy, sell, explore, and admire all that the plastics industry has to offer.

As has been the case with so many business sectors, the past several years have wrought difficult and unpredictable conditions for the plastics industry—a period that may have spelled out the end for SPI, were it not for Bill’s experience and leadership.  He remembers a particularly adrenaline-pumping period beginning in February of 2009, when large blocks of exhibitors began to consider withdrawing from the trade show scheduled only several short months later.  Instead of watching the association’s opus unravel before his eyes, Bill hopped a plane to Japan within a week to meet with the key exhibitors that collectively controlled 55 percent of the injection molding market in the U.S.  With a persistence that refused to take no for an answer, he eventually met with each industry leader, developing friendships and collecting information to assist in molding his next move.

After learning that Japanese sales were down 90 percent and later receiving a call that the European exhibitors were also planning to pull out of the show, Bill spent the following two weeks working with his officer group to develop a stimulus package.  The committee approved the plan with no discussion of how to fund the $3+ million package, save for a single comment: “I’m not worried; Bill will figure out how to make this work.”  Later that month, Bill presented the finance committee with a plan for a much-needed restructuring of the organization such that the package could be covered, and he met with each of the association’s thirty board members over the next several months to gain support.  “I learned a lot during that time, selling my concepts across a broad range of people to get the approval we needed to move forward,” he reflects.  “My sales background really compels me to communicate with people throughout the entire course of an issue and negotiation, allowing me to fully understand what the issue is and gain an educated idea of how to solve it.”

Through his efforts to provide subsidization to exhibitors and allow free admission to attendees, the 2009 trade show proved a ray of light amidst otherwise dark times, marking a turning point in the industry for which people are still thanking Bill today.  “We can’t know what could have happened to the industry had the show fallen through,” Bill comments.  “All we know is what did happen.”  Though their overall attendance was down 30 percent, unique company representation was only down 12 percent.  The attendees that did show up were the buyers of their organizations, and as a result of the slimmer crowd, sellers were able to spend more quality one-on-one time with customers.  In fact, the main Japanese seller sold more machines at the 2009 show than at any other year—a testament not only to the efforts of the association itself, but to the pure power of ingenuity to triumph in the face of adversity.

When examining the personal history behind Bill’s unique go-getter mentality, one can readily identify both innate inclination and cultivated learning at work.  Bill had actually intended to pursue a career as an automotive mechanic in high school, but after gaining ample dealership experience, he felt as though life might have something else in store for him.  “I couldn’t see myself doing it forever; I had bigger aspirations,” he recalls.  His parents didn’t have the money to send him to college, so he joined the air force to get an education but soon received an honorable discharge from basic training due to a previous detached retina.  Disappointed but not discouraged, he decided to pay for college himself.  “I knew the only thing I could ultimately control was my own action,” he says now.  “I may not be the smartest guy in the room, but I had been told that drive and determination win out over raw brains any day.”

With this in mind, he enrolled at Purdue University in Fort Wayne, working at a gas station and car wash in his spare time and befriending a man by the name of Bill Dice.  The two shared a passion for cars and would talk avidly about them every Saturday until Bill transferred to Purdue’s main campus for his junior and senior year.

The experience of campus life transformed Bill in ways that proved to be as invaluable as they were drastic.  It was almost as if his innate fortes for leadership and strategy had lain dormant, waiting for the right environment to set them aflame.  Mirroring his father’s passion and commitment to community involvement in many ways, Bill attended summer conferences for the Trade Association, joined the American Society of Agricultural Engineers, and served as Vice Chair of its National Student chapter.  Bill not only came into his own as a student leader, but also as a family man, marrying a woman named Sherri the summer before his senior year.

His innovation skills were further honed after college while working for the Indiana Farm Bureau Co-op, excelling through a state-operated fast-track management program and thoroughly immersing himself in dairy farm culture.  He then made a considerable stir in the industry by endorsing and selling new technology that proved to increase milk production by 25 percent.  “The whole experience taught me the importance and profitability of always looking at new technology or new ways of accomplishing things, never being constrained by the status quo,” he explains.

Several years out of college and amidst this success, Bill found himself covering an emergency shift at the old gas station where he had worked throughout his youth, when suddenly his old friend Bill Dice showed up.  Mr. Dice invited Bill to come work as a regional sales manager for him and wouldn’t take no for an answer, so the young man took the leap of faith and never looked back.  “I’m glad I did because it moved me into the industrial manufacturing side of things, setting me up for the career I have today,” Bill reflects.  Under the influence of a mentor and true visionary, Chet Dekko, he was thrown into any number of sink-or-swim situations in his new role, and considering he’s here today to tell the tale, it’s safe to assume that he succeeded in keeping his head above water.  Through his efforts at assembling and implementing a strong sales team, Bill was able to quadruple the business within two years.

Despite such pronounced success, however, he knew that he needed more intensive manufacturing experience to get where he hoped to go in the future.  Thus, he pursued experience in the glass industry for the next five years until Chet offered him the position of Sales Manager of their plastics machinery business, Autojectors.  Bill was promoted through the ranks to President over a period of eight years, growing the business from $3.8 million to $20 million in that period.

During this time, Bill also accepted a position as VP of Marketing Van Dorn, then a $210 million company in Ohio.  It was shortly after his rise to President and CEO of what had grown into a $450 million global enterprise when the former President and CEO of SPI submitted his resignation, and Bill began to receive calls encouraging him to consider the position.  Though several mentors thought he was crazy to give up so much to pursue this new life, Bill has since proven that the decision was a sound one.  “It has been phenomenal,” he says now.  “Every day has been different, and I continue to learn new things and find new ways to engage the breadth of our membership.”

Yet again, Bill’s decision to take this leap not only demonstrates a willingness to take risks, but also a trust in his own intuitions and inclinations that has guided him well over the years.  “I have always had a good gut,” Bill laughs.  “Although I’m very metric-driven and analytical, I know that when my gut tells me something, the foresight is usually correct.”

Beyond this insightful skill, Bill stresses the importance of developing and preserving good relationships.  “Never burn any bridges,” he urges.  “In the business world, there have been some situations where I might have wanted to give someone a piece of my mind, only for them to later join the association, making me thankful that I had maintained good relations.”  Through the powerful summation of gut instinct, strong relationships, and a go-getter attitude that doesn’t hear the word no, young entrepreneurs today can truly hope to create opportunities out of adversity and success out of strife.