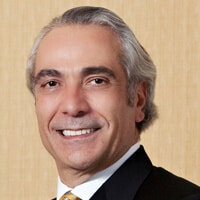 When 19-year-old Christos Efessiou left his homeland of Greece to enroll as a senior exchange student at a U.S. high school just west of Boston, it was as though the young man were taking his first bold steps out onto a wire suspended a hundred feet above the ground.  He had only one year to learn a language he did not speak and earn admittance to an American college or else he would be forced to return to Greece to work for his father’s company—a future that would be undoubtedly secure, yet dishearteningly dependent.  Now the founder, President, and CEO of Strategic Pharmaceutical Advisors (SRxA), an international consulting, marketing, and education firm, Christos’s story is a testament to every young person’s brave first steps out along that quivering, indefinite, yet ultimately rewarding wire of risk.

In an industry in which companies tend to start with a business model and add intellectual assets as projects are acquired, SRxA has devised a stronghold from the supremely unique reverse position of signing on industry leaders and then building a business around that knowledge.  “I essentially turned that concept on its head by embracing the idea that, if the equation works from left to right, it should work from right to left as well,” Christos explains.

Combining the top Key Opinion Leaders (KOL) in specific clinical fields with the highest expertise in business administration, SRxA has now grown into a force of over 50 independent physicians spread across three continents, 40 of which are campaign leaders and considered to be at the pinnacle of their careers.  “These individuals aren’t just very good practitioners, but also professors, clinical or otherwise.  All conduct research, and they’ve ascended to the executive offices of their professional colleges, many of which are among the most revered professional academies worldwide,” he continues.  “I reasoned that, if we could attract such advisors to SRxA, we could capture a good amount of market share, and that’s exactly what happened.”

SRXA is set up such that the relationships it holds with its opinion leaders are nonexclusive, which actually increases the value of each individual to the firm as a whole.  “To me, the greatest value of each person comes from their clinical practice, research, and involvement in their own professional college or academy, which allows them to interact directly with the pharmaceutical industry and remain completely immersed,” says Christos.  Building the value of each component part of SRxA, then, allows the firm to become so much greater than the sum of its parts, and its clients are well acquainted with this concept.  “When someone comes to us for the advice of Dr. X, they know they’ll also get the advice of Drs. Y and Z,” he explains.  “They’ll get the opinion of each individual doctor as well as of the collective group, and that is where the value lies.”

Today, SRxA is among the only companies that brings together such a compelling sum of top-notch minds in a for-profit environment, and it wields the allure of this status to engender a commitment to steely impartiality, irreproachable ethics, and an unparalleled clarity of thought and advice.  “We attain this standard by employing a hard and fast set of rules for our advisors, affirming that SRxA is a corporate entity and that its independent advisors will never be a mouthpiece for anybody,” Christos describes.  “We always, without fail, deliver a true factual opinion, even if it’s not what our clients necessarily want to hear.”

And how, exactly, does SRxA’s team of gurus ascertain whether a tune is right or not?  Information is reverse-engineered to delineate the path to its source.  If an error or misrepresentation is found along the way, the path is then re-created going forward, correcting the message that is ultimately generated.  It is, at once, a business of integrity and of the highest intellectual prestige, and the repute and expertise engendered through this process are used to provide clean, honest, ethical, and scientifically-based advice to each client.

There is much to be said for such achievements in themselves, but when one takes into account the variables working against Christos and his team, the victories are lent even more sway.  “If you operate in pharmaceuticals, you’re working in one of the most regulated industries in the country,” Christos stresses.  “You can do nothing, say nothing, and show nothing unless it has been prescribed by the FDA.”  Amidst this challenging landscape, much has changed in the past several years that limits the type of work physicians can do, and SRxA has re-engineered its entire concept—not to follow the new regulations, but to stay ahead of them.  “If you follow the new regulations, you’re a year behind,” Christos points out.  He is also well-known for staying at the cutting edge of technology, operating the company predominantly wirelessly since it was launched in 2004.

Utilizing these techniques, SRxA grew 100% annually on its advisory side for the first three years, escalating from four advisors to 15.  In the three years since, it has added another 20 plus individuals and five new divisions to the company’s portfolio.  “In a business like this, you’re evaluated on both the depth of each specialty and on the breadth across the different clinical specialties that you cover,” Christos points out.  “Otherwise, you’re going to pigeonhole yourself behind certain therapeutic areas which will dictate what market you can follow, and this kind of limitation is just not in the spirit of SRxA.”

The structural integrity of his practice, however, is only as successful as the individuals chosen to work within it, and Christos utilizes a leadership style that focuses on knowing who the right people for the job are and then valuing them accordingly.  “When I interview, I do so almost exclusively based on the candidate’s personality, because you cannot teach someone how to be ethical or personable, or how to work with that kind of bold energy that will give you the rocket boosters you need to get through a demanding project,” he says.  Once he has brought these people into SRxA, he treats them like the tremendous assets that they are.  “My management philosophy has been to tangibly show my team that I value them—possibly more than they value themselves,” he adds.  “Operating in this mindset inspires people to work ten times as hard and be ten times as loyal.”

Christos first came to acquire his keen sense of business while growing up in Greece, where his father—a self-made man—was truly a titan of the durable medical equipment industry.  While certainly impressive, his father’s footprint left little room for Christos to prime his own impact, which prompted the young man to take the leap and move to America.  “Operating on part gut, part intellect, and part self-confidence, I seized the challenge to do what my father himself had done—to see what I was truly capable of,” he explains.  “I have always been an all-or-nothing person, but never a gambler.  I calculate risk fairly well and feel comfortable with probability, knowing that one can’t possibly apply himself to the fullest if he knows there’s a safety net below.  Do your due diligence, go all in, and leap.”

The young man had no family in the United States, couldn’t speak the language, and had never been away from home before, but he leapt anyway.  He picked up English through osmosis and Sesame Street, took the SATs several times, and was admitted to all 36 of the institutions to which he had applied, much to his surprise.  “I felt I only knew the language at a rudimentary level, but if a university was willing to take a chance on me, I was willing to be that person,” he remembers.  His courage was rewarded when he woke up one morning during his freshman year and realized he had dreamed in English the night before.  “It was the biggest boost of confidence I had ever known, and nothing could stand in my way after that,” he continues, his air captivated by the same exuberance he describes.  “My self-assurance went through the roof, and once you feel that, you’ve got it.  From then on it was simply looking at opportunities and capitalizing on them.”

Though he began his college career along a premed route, he soon realized that he was far more interested in the business of medicine than the practice of it, and so shifted gears accordingly.  When, at the age of 27, Christos found himself degreed, board-certified, and registered in respiratory care, and working in the second highest position available in his specialty, he knew it was time to switch gears once again.  With that, on the last day of 1984, he took out a $3,500 loan to pay for a career advisor to help explore his next move.  It was this decision that first opened his eyes to the salesperson behind the scientist in his psyche, and several months later, he got the call that would mark the advent of his association with the pharmaceutical industry.

Testing the limits of possibility.  This has always been what draws Christos, and what draws others to him.  “Anything that had a challenge, I was behind,” he remembers.  “Anytime anyone said no, it was my license to go do it.  If someone said I couldn’t do something, I would say, watch me.”  This willingness to put himself on the line stems from his very compelling definition of the word failure.

“There is a big difference between non-success and failure,” Christos stresses.  “Not succeeding does not necessarily mean you’ve failed.  I believe you fail only when you have firmly decided and convinced yourself that you have, and this is the worst thing you can do to your mindset.  I’m not suggesting that you should couch nonsuccesses to make them look like successes, but if you can take the successful elements out of an unsuccessful enterprise, you can always build something from that.”

This fundamental belief in the power of the human spirit to create, even in the face of adversity, has been the driving force behind his success.  Christos has spent his professional career triumphing over the challenges of a foreign nation and over the myriad intricacies that true entrepreneurship entails.  In addition to launching three concurrently operating businesses in the span of a decade and remaining ever ready for the next challenge, Christos has a book in the works that draws a very perceptive line between the art of business and the art of parenting.  CDO: Chief Daddy Officer; The Business of Fatherhood is slated for release in September of 2011.  Promising to be replete with strong values and useful idioms, this book will teach all business professionals and family men the appropriate tools to discover how to use their skills in business to strengthen their families.

“Everything starts with you,” Christos reminds us.  “Walk your own wire.  Stay grounded in reality, but believe that nothing is impossible.  If you refuse to let yourself down, you’re not going to let other people down either.”