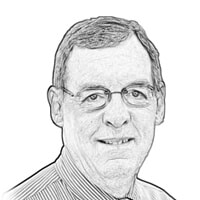 Henry Ford of Ford Motor Company first knocked on L.P. Steuart’s door in the early nineteen hundreds—a knock that would reverberate through the Steuart/Martens family for a hundred years to come and in ways the young boy could never have imagined at the time.

“I’d like your help selling my machine around this area,” Mr. Ford told the young man.   L.P., who had dropped out of school in the eighth grade along with his brother to support the family, had started a hauling business serving downtown Washington, D.C.  With a second-hand cart hooked up to an old mule, the boys would deliver coal in the winter and ice blocks in the summer.  Having come to know and serve the folks of the region, their renown and expertise was ideal for Mr. Ford’s lofty objective: to bring the car industry to the nation’s capital.

“My grandfather used to tell us that selling the cars was only half the battle,” remarks Harry Martens III, now the President of Martens Cars of Washington Inc. a century later.  “The other half was actually teaching the buyers how to drive.  In those days, nobody drove.  It was a brand new undertaking, and that’s how our business started.”

Since that first and fateful knock on the door, the business grew over time as more car manufacturers took root in the area.  As the numerous small manufacturers began to consolidate, the company acquired a DeSoto distributorship, selling DeSoto cars along the East Coast.  Harry’s grandfather also branched into the Chrysler arena, at one point in possession of eight Chrysler dealerships in the Washington area, which marked the enterprise’s most robust period.

Harry’s father met Mr. Steuart’s daughter when he was released from the Army after serving in World War II, and he fit seamlessly into the gears of the business.  Despite the addition of a family member into the management structure, however,  “Mr. L.P.” couldn’t help but feel that his company seemed less and less like a family business the greater it grew.  “My grandfather always ran this as a family business and with a corresponding set of values,” Harry reflects.  “He treated his employees and customers in accordance with those values, which became more challenging as the business expanded and the atmosphere became less personal.”

Thus, when he realized he no longer knew all the names of his customers, his employees, and their families, Harry’s grandfather and father decided it was time to pare the business back.  “As you get big, you get impersonal,” Harry acknowledges.  “You lose the family element that makes the business so unique and worthwhile.  Thus, through an evolution influenced both internally and by external factors, we eventually whittled back down to one primary location with two brands–Volvo and Volkswagen.”

Harry’s grandfather, whom he affectionately refers to as “Pop-Pop”, worked until the day he died when, at the age of 86, he had a heart attack.  “Nobody was going to retire him,” Harry smiles now, remembering the man’s unparalleled work ethic and heartfelt commitment.  Harry’s father later passed away in 2004, and Harry now views the continuation of his patriarch’s legacy as the North Star that guides his professional journey.

“Maintaining the family values that my father and grandfather honored so deeply is our absolute top priority here,” he says.  “We’ve had many opportunities to buy other franchises and dealerships, some of which were quite appealing.  But when it came down to it, we thought about what our grandfather would want us to do.  Indeed, his influence continues to be our guiding principle today.”  This ideology is encapsulated in the business’s mission statement, which Harry penned back in the seventies.  “Our goal is to be the best car dealership in the Washington, D.C. area,” Harry proclaims.  “Not the biggest, but the best.”

Long before he began his journey with Martens Cars, Harry’s first job was delivering Washington Posts in the morning, earning extra money because he yearned for some measure of independence.  For several years, the young boy would rise every morning at 4:30 come two feet of snow or early morning thunderstorms, riding up to each house and carefully placing the paper in its carriage.

The summer he turned 14, Harry’s father told him he would work in the parts department at his store on P Street.  Even now, he remembers the words of wisdom his Dad delivered the night before his first day of work.  “I’m going to tell you exactly what I expect of you,” Harry senior had said.  “I expect you to be down there a half hour before anybody else arrives, and I expect you to leave a half hour after everybody else leaves.  I expect you to work three times harder than anybody else because you’re the boss’s son, and everybody’s eyes are going to be on you.”

Replicating this effective dose of tough love, Mr. Martens also obliged his son to find his own way to work, which involved biking to the bus stop and then switching bus routes each morning and each evening.  “I can vaguely remember my father driving past me and waving,” Harry recalls, reflecting on the convoluted commute.

Still, not even the arduous journey to and from work could hinder the quick and natural affinity Harry felt for the job, and he returned the following summer to work in the store’s service department.  The summer after that, he returned as a service advisor.  “I basically did all the jobs in the dealership, which is the best way to learn,” Harry affirms.

As a young man, Harry never explicitly sat back to consider what he wanted to do with his life—which goals he wanted to pursue, or what he wanted to be.  Rather, fulfilling the family legacy seemed to be almost as innate as breathing, and as natural as a heartbeat.  “I don’t know that it was conscious,” he examines.  “It was just there.  It was an unspoken thing.”

After high school, Harry attended Brown University—a decision he attributes to his grandfather.  Each time he would visit his grandfather as a child, the old man would ask how his grades were.  “He didn’t have a formal education, and it was perhaps for that exact reason that he could truly recognize how valuable it was,” Harry surmises.  “Drilling this importance into us in this manner gave me a true determination to do well in school and to achieve some good.”

After graduating from Brown with a degree in economics and serving a tour in the Navy, Harry returned home and slipped naturally into a new role as the marketing manager for Volvo Cars of America.  He served in that capacity for a year, helping to find new dealers for Volvo in the region extending from Pennsylvania to Florida, until his father notified him that he was needed at the family Volvo store.  “Again, I didn’t ask questions,” Harry recalls.  “I reported for work on January 2nd, 1973.”

Having spent his high school summers working the back end of the business, which was heavily focused in parts and service, he was more than well versed in the value of genuine and heartfelt customer care.  “My grandfather had always stressed that, if we really took care of our customers in the service end of the business, they would trust us and come back to buy their new cars from us in the future,” he recalls.  When he started in 1973, however, he found himself operating the sales end of the business for the first time.  “I had to learn from the ground up at that point, but it was great,” he remarks.

Assuming more responsibility over time and coming to master every detail, large and small, of the business, Harry has since dedicated his professional life to Martens Cars.  This is not to suggest, however, that he did not stop to question the path his life had so naturally assumed.  In 1980, he realized it was time to confront that question.  “I hit a wall and asked myself for the first time if the car business was really what I wanted to do with my life,” he recalls.  “I realized I could keep doing it, or I could stop and try something new, and I wanted to try something on my own that I was responsible for without the support of the whole company.”

As fate would have it, he seized the opportunity and decided, after much groundwork, to subdivide the 200-acre farm that had belonged to his grandfather into 55 lots and launch a real estate development company.  Partnering with a close friend and using their joint expertise in construction, design, marketing, and finance, Martens Edwards Development Company was born.  “At one point we had a townhouse project in Fairfax County, another in Frederick, and four or five other projects going at once, and I absolutely loved it,” Harry recalls.  “I loved starting with nothing but raw ground, creating something, and then stepping back to see what we had done.”

Like so many developing companies during that time, Martens Edwards met an untimely but respectable end in the real estate depression of the early 1990s, yet Harry was able to optimize the hardship by drawing invaluable leadership skills that assist him today at the helm of Martens Cars.  “That experience really reinforced the idea that what goes up must come down, so you better be ready for it by planning ahead to find a way through it,” he points out.  “Businesses and young people who haven’t gone through a recession and learned this yet will find this a harder lesson to learn than most.”

Such a skill has been exceptionally advantageous in the past several years, as Martens Cars has ridden the wave of the recent recession with a measure of grace that suggests the enterprise will persevere for years to come.   Yet the company’s surfing ability can hardly take credit for the bulk of its staying power.  Rather, that honor goes to the enduring atmosphere of family values that the business continues to live, breathe, and impart.  “People are always talking about the “new normal”—the change in philosophy and ethics that has been ushered into society along with our new technologies and ways of life—but I prefer to stay committed to old fashioned values like integrity, responsibility, and work ethic,” Harry stresses.

Indeed, Martens Cars was first born into the kind of world where someone could buy a $3 million piece of property through the binding trust and mutual respect garnered through a simple handshake.  It didn’t take contracts, signatures, or written agreements to inspire both parties to abide by an agreement as it does so often in today’s society.  “There are some rare people who you can still shake hands with and know their word is their bond,” Harry reflects, “and it’s impossible to overemphasize the sacredness of that.”  Thus, in a world where the status quo leaves much to be desired, Martens Cars remains committed to infusing this “new normal” with the timeless values that enable us to have faith in the human relationship, whether professional, personal, or one in the same.