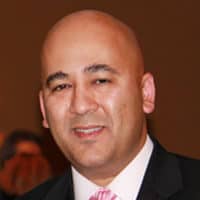 Serving Our Country with Pride

Ahmed R. Ali, Founder and CEO of TISTA Science and Technology Corporation, a government service contractor in the area of information assurance and cyber security knows the importance of hard work and providing service that you are proud to have your name on.

Within a few short years, Ahmed grew TISTA from a one-person company, with revenue close to $160,000 to over a 100 person company with over a $10 million operation which has continually doubled its profits every year since its inception.

“We’re poised for more growth and it’s only because of the quality people we have on board. I can’t take credit for everything.”

But Ahmed isn’t only interested in engineering and technology, he also has a deep-seated desire to serve his country and make a difference. When he saw the movie Top Gun, where a young Tom Cruise aspires to become the best fighter pilot in a prestigious naval training school, Ahmed was hooked. “I think that was the best recruiting movie in the history of the military,” he laughs. “It made such an impression on me.”

Such an impression that, when in his junior year of college he ran out of money to continue his studies in mechanical engineering, he decided to join the military and, after his tour of duty ended, use the educational benefits to complete his degree. Early on, Ahmed’s propensity for strategic thinking, his dogged determination, and his strong belief in the value of education were clear and evident.

Unfortunately, Ahmed did not meet the eyesight requirements to train to become a fighter pilot, like his Top Gun icon, and so he elected a track more aligned with his technical background.

“It was like college, except you’re in class from 7 a.m. to 5 p.m. straight,” he says. “They packed four years of college into your brain in a year and a half.” His days were very structured, but Ahmed enjoyed it and graduated near the top of his class.

After training, Ahmed was offered several options for his base station. He chose Pearl Harbor, Hawaii, serving three tours on a guided missile destroyer in the Persian Gulf. From day-to-day, his job entailed working on the radar systems, tracking missiles, helping pilots land on carriers, and track incoming threats. Periodically, he also served as part of a small team responsible for approaching, and if necessary, boarding any ships in Iraqi waters that did not have United Nations authorization to ship goods in that area. “It was an amazing experience and I worked with some of the best people I’ve ever met in my life.”

Being in the military also helped Ahmed clarify what was most important to him. He discovered his love of country and his pride in serving. He also realized that he someday wanted to have a business that could somehow support the United States government and its mission. “I wanted to go to bed at night feeling like my work had a positive impact on the lives of other people and the national interests of our country,” he shares.

After his life-changing, six-year stint in the U. S. Navy, Ahmed chose to pursue a career in the civilian sector, and received an honorable discharge from the military in 2001. For two years, he worked as a radio frequency engineer with a small company located in the U.S. Naval Academy complex in Annapolis, MD, that worked with U.S. Department of Defense (DoD) agencies. He also returned to college, shifting his major from engineering to information systems.

Looking to move into IT, he accepted a job with the U.S. Department of Commerce as a patent examiner in the area of computer security and cryptography. In the U. S. Patent and Trademark Office, he reviewed patents submitted by IBM, Hewlett-Packard and other computer giants. This exposure opened his eyes to the tremendous growth potential in computer technology. Ahmed also noted how many different companies were supporting the government with extensive, high-end contracts for communications and engineering systems used in military operations. He was fascinated and intrigued.

After doing some research, Ahmed decided to focus on IT security. There was a huge demand within the federal government and in the private sector for people who could keep data and networks secure, preventing anyone from hacking into an organization’s network infrastructure. With his background, Ahmed knew he could easily master this growing specialty and promptly enrolled in graduate school, attending Capital College at night to pursue a master’s degree in Information Assurance, which he completed within two years while still working full-time and taking care of his family.

Upon completion of graduate school, Ahmed got an unexpected call from a friend and former colleague who was leaving his job as the Information Assurance Manager for an agency within the DoD. Ahmed’s friend suggested that Ahmed apply for the position, which he did, and he was hired. After working there for several years, Ahmed believed he had enough experience, background, and contacts to start his own reputable company, with the knowledge to do it right.

The timing was also auspicious because a recent Executive Order signed by the then-President George W. Bush mandated the increase of federal contracting opportunities for service-disabled veterans who owned businesses.

So, in late 2005, TISTA Science and Technology Corporation was born with the DoD as its first client. Working alone on the project for about a year, Ahmed invited a colleague to partner with him and a year or two later, TISTA was awarded another government contract.

With a new partner on board to share the workload, Ahmed decided to pursue an MBA to complement his technical skills with a solid business background and to enhance his ability to more effectively operate and grow the business. Ahmed completed his MBA with a concentration in International Business two years later.

Starting out, Ahmed found the biggest challenge was cash flow. Like many entrepreneurs, he invested all of his own funds to get things rolling. Although he had lots of great ideas for the direction he wanted to take the company, he couldn’t execute them because of limited finances.

“It’s hard to grow a company when you don’t have the funding to do it,” he professes.

Modest and down-to-earth, Ahmed came from a very humble background. His parents immigrated to America from Bangladesh in 1976. They had lost their first son to pneumonia and later when Ahmed was born, they wanted a better life for him and better opportunities for the whole family.

Although his father had an engineering background, he spoke very little English so both of Ahmed’s parents worked odd jobs to get established, while they learned the new language. They lived very minimally and moved around a lot causing Ahmed to attend five different elementary schools, two different middle schools, and two different high schools. Eventually, his father got an engineering job in the private sector and later purchased a home in College Park, MD, and after several years they purchased a home in Bethesda, MD, near relatives. Ahmed’s father later went on to be a senior government official, and retired in 2008.

Because his father was such a tremendous influence in his life, Ahmed decided to name the company after him.

“My father was born in a village near the Tista River, which flows through several countries in Asia,” says Ahmed. “What better way to honor someone you look up to and deeply respect?”

As a family man, Ahmed was also challenged by the amount of time he had to put into the company, working long 10 to 15 hour days, often on weekends.

But he persevered and he now credits much of TISTA’s success to his team, especially the people he calls the “pioneers” of the now multi-million dollar enterprise. These pioneers include Faisal Quader, who was instrumental in helping to shape TISTA from the initial idea, Marion Devoe, who had his own small (8a) business and then joined forces with Ahmed, and also Asif Ahmed who was a trusted and well-respected friend.

“Any company is only as good as the people that it has in the organization, especially the senior leadership team,” Ahmed asserts. “I have an amazing group of people, extremely hardworking and extremely ethical. We share the same vision. I’m not in this for myself.”

Ahmed believes in supporting his team and this is reflected in his leadership that is based on the core principles of equality, respect, and commitment. He treats everyone the same, not based on their title or role, offering equal respect to all.

“There is a perception that owners and senior-level executives are not approachable,” he observes. “I want the people that work around me, for me, or with me to be as comfortable as possible.”

Ahmed also believes it is imperative to stick to your word. As a leader he values follow-through and makes sure he stays committed to the people around him, not just the bottom line.

“Obviously, we want the numbers to be good and healthy, but if I have to sacrifice the bottom line to make sure that my people are taken care of, in every respect, I’ll sacrifice that bottom line. Our model is different. Whatever profits we have, we reinvest in the company, in our people.”

Ahmed’s commitment extends beyond TISTA and he is an active champion for children’s causes. “My father comes from a part of the world where he saw struggle and because he lost a child he has always been passionate about supporting children who didn’t have parents, food, clothing or education.”

This has inspired Ahmed and he supports his father’s efforts to build orphanages and schools in Bangladesh. As an organization, TISTA also provides continuing support to multiple nonprofits that help children, women, veterans, and others in need. “I feel that at least I can leave some sort of legacy behind, to make a difference in people’s lives,” he shares.

For Ahmed Ali, it all boils down to pride. Pride in his inspiring and generous father, the pride and joy that his children and family bring him, his pride in serving multiple deployments in hazardous regions around the world while serving the U. S. military, and the ultimate pride of bringing a long-held personal dream into fruition by creating a thriving, multi-million dollar business that is positively impacting our country and our nation every single day.